Madeline and the Old House in Paris (Hardcover) 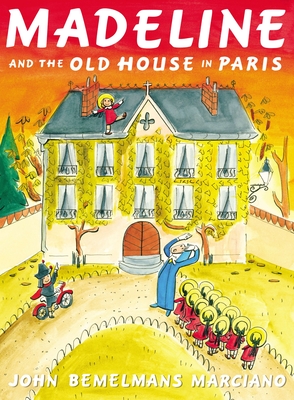 Madeline and the Old House in Paris (Hardcover)


Available to Order - Usually Arrives in Our Store in 4 to 7 Days
To the ghost, Madeline said "Pooh-pooh."

Madeline and her favorite companion in mischief, Pepito, embark on their wildest adventure yet. When ghostly moans lead them to the attic of the old house in Paris, they discover Felix de La Morte, who has lingered there for hundreds of years, waiting for the return of a certain comet. With the comet due to return the very next day, the poor fellow’s telescope has been stolen by mean Lord Cucuface, and it is up to Madeline and Pepito to get it back. A nighttime trip across Paris, a midnight apparition, and all is happily resolved in time for the three new friends to view the comet on a starry night.
John Bemelmans Marciano is the grandson of Ludwig Bemelmans, creator of the Madeline books. John has written and illustrated four books about Madeline, carrying on his grandfather’s legacy. John, his wife Andromache, and their daughter Galatea live in Brooklyn, New York.

Praise for MADELINE AND THE OLD HOUSE IN PARIS:

"Marciano does a fine job of replicating the mood, spirit, and look of his grandfather’s much-admired books"—Publishers Weekly