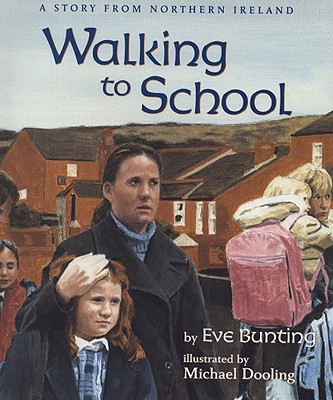 By Eve Bunting, Michael Dooling (Illustrator)
Please email or write store for pricing and availability information.
Out of Print

Walking to school can be hard if you live in Belfast, Northern Ireland. It's downright dangerous if you're a Catholic, like Allison, and the shortest route to your school goes through a Protestant neighborhood. But sometimes a ray of kindness cuts through the violence. That's what happens when a demonstrator rips a brass button off Allison's new school blazer, and a Protestant girl not only retrieves the button but returns it to Allison.

Once again, as in FLY AWAY HOME and the caldecott-winning SMOKY NIGHT, Eve Bunting finds a way to explore a complicated contemporary situation in terms that any young reader can immediately grasp.

Eve Bunting has written over two hundred books for children, including the Caldecott Medal-winning Smoky Night, illustrated by David Diaz, The Wall, Fly Away Home, and Train to Somewhere. She lives in Southern California.

"Eight-year-old Allison is afraid to walk to school, a simple act made dangerous by “the Troubles” that wrack Northern Ireland. Accompanied by her mother and uncle, she crosses “Protestant territory” to get her Catholic school. With her lucky marble clutched tightly, Allison fights through the spitting mob, her torn coat button flying. To her surprise, a Protestant child returns the article and Allison hands her the cherished marble, concluding that children’s friendships would overcome religious differences “if the grownups would let us.” Bunting describes intolerance’s complexity, painting Allison’s uncle as a lovable family man but bigoted; Allison fears his direct involvement with a man’s severe beating causing her to ask herself, “But are we a bad lot, too?” Dooling’s oils exude a grittiness that often results in jarring, unfocused perspectives that convey the turmoil. Having lived personally through this tumultuous period, Bunting includes an author’s note for background. This work slowly examines religious intolerance’s impact on one individual, providing no easy resolutions."--Kirkus Reviews

"Bunting addresses the complicated relations in Northern Ireland. Narrated by Allison, a Catholic, the story effectively captures the child's trepidation and confusion, particularly as she has learned that a favorite uncle has committed violent acts. A Protestant girl's act of kindness during her frightening walk to school leads her to conclude, "I think we could be friends...If the grownups would let us." The book does an excellent job of presenting the situation from a child's perspective without demonizing either side, but adults sharing it must be prepared for the inevitable questions as to why such tensions exist, as no background or history is presented in either the story itself or the author's note. Dooling's oil-on-canvas illustrations are realistic enough to resemble stills from documentary footage. Little on this situation is available for children, but do be prepared for those questions."--School Library Journal

"Walking a gauntlet of Protestant hecklers to her new school is scary for Allison, a Catholic child in Northern Ireland. Worse, she worries that the uncle who accompanies her enjoys the violence. In spite of the mob and confusion, she and a young bystander make a connection: "I think we could be friends. . . . If the grownups would let us." This picture book for older readers beautifully depicts the centuries-old friction between Catholics and Protestants, which, as late as 2001, affected schoolchildren. Dooling's oil-on-canvas paintings, reminiscent of Norman Rockwell but with an underlying tension, are beautifully reproduced on large-scale, double-page spreads, and the dark palette reinforces the story's themes of struggle. An afterword briefly summarizes the historical background. This is a poignant reminder that first days of school are not always a cause for celebration, and teachers may want to connect this title with titles such as Eileen Lucas' Cracking the Wall (1998) about the Little Rock Nine. The book closes with an additional plea for peace."--Booklist