The Jesus Mysteries: Was the "Original Jesus" a Pagan God? (Paperback) 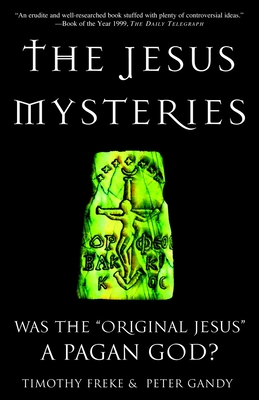 The Jesus Mysteries: Was the "Original Jesus" a Pagan God? (Paperback)


Available to Order - Usually Arrives in Our Store in 4 to 7 Days
Drawing on the cutting edge of modern scholarship, this astonishing book completely undermines the traditional history of Christianity that has been perpetuated for centuries by the Church and presents overwhelming evidence that the Jesus of the New Testament is a mythical figure.

“Whether you conclude that this book is the most alarming heresy of the millennium or the mother of all revelations, The Jesus Mysteries deserves to be read.”
—Fort Worth Star-Telegram

Far from being eyewitness accounts, as is traditionally held, the Gospels are actually Jewish adaptations of ancient Pagan myths of the dying and resurrecting godman Osiris-Dionysus. The supernatural story of Jesus is not the history of a miraculous Messiah but a carefully crafted spiritual allegory designed to guide initiates on a journey of mystical discovery.

A little more than a century ago, most people believed that the strange story of Adam and Eve was history; today it is understood to be a myth. Within a few decades, authors Timothy Freke and Peter Gandy argue, we will likewise be amazed that the fabulous story of God incarnate—who was born of a virgin, who turned water into wine, and who rose from the dead—could have been interpreted as anything but a profound parable.
Timothy Freke has a degree in philosophy and is an authority on world mysticism, with more than twenty books published internationally. Peter Gandy has an M.A. in classical civilizations, specializing in the ancient Pagan Mystery religions. They have coauthored three previous publications: The Complete Guide to World Mysticism, Hermetica: The Lost Wisdom of the Pharaohs, The Wisdom of the Pagan Philosophers, and Jesus and the Lost Goddess.
"Book of the year.”
—Daily Telegraph

“A wonderful blend of detective story, historical research, and clear thinking, The Jesus Mysteries explains in accessible form what has been known to scholars for centuries. The time for the inner mysteries of Christianity to be brought out of the closet is long overdue, and this book is a powerful and courageous voice for the cause.”
—Roger Housden, author of Sacred America and Sacred Journeys in a Modern World