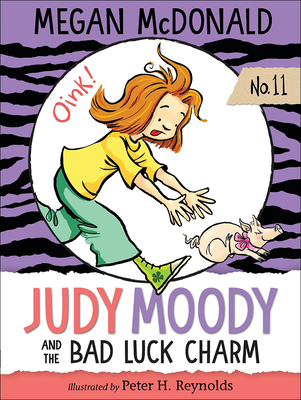 Will Judy's lucky penny lead her to the nation's capital i1/2 or to third-grade C-A-L-A-M-I-T-Y? And what do her spelling-bee nemesis and a potbellied pig have to do with it? The lucky penny in Judy Moody's pocket sure does seem to be working. She can't stop winning i1/2 at bowling, spelling, the unbeatable Prize Claw, everything For sure and absolute positive, she'll ride that wave of good fortune all the way to Washington, D.C. Watch out, District of Cool, here comes Judy Moody, the luckiest kid ever, until . . . oh, no Her lucky penny just did a belly flop into a porcelain bowl of yucky, blucky UNluck. Has the coin's magic gone kerflooey?Are some people, like Jessica Finch or Stink, destined to have all the luck, while she, Judy Moody, gets stuck with a yard full of three-not-four leaf clovers, a squealing potbellied pig in an elevator, and a squashed penny with cooties? ROAR.
Megan McDonald is the creator of the popular and award-winning Judy Moody and Stink series. She is also the author of three Sisters Club stories, Ant and Honey Bee: A Pair of Friends at Halloween, and many other books for children. She lives in Sebastopol, California. Peter H. Reynolds is the illustrator of the Stink and Judy Moody books and the author-illustrator of The Dot, Ish, Sky Color, So Few of Me, The North Star, and Rose's Garden. Born in Canada, he now lives in Dedham, Massachusetts.