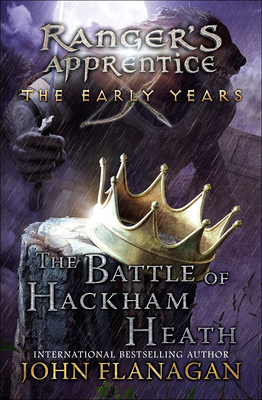 By John Flanagan
Email or call for price. Handling fee may apply.
Available to Order - Usually Arrives in Our Store in 4 to 7 Days

John Flanagan, author of the bestselling Ranger's Apprentice fantasy adventure epic, delivers a second prequel to Ruins of Gorlan, the novel that started it all, with Halt and Crowley preparing for war against a near-unstoppable enemy
When the former Baron Morgarath escaped to avoid punishment for treason, an uneasy peace fell on Araluen. But Morgarath, now in hiding, is already planning his next move, recruiting an army of savage, overpowering beasts known as Wargals. Newly crowned King Duncan knows he must assemble his troops for battle.
To find out the full extent of Morgarath's plan of attack, Halt prepares for a seemingly impossible task--climbing the deadly cliffs of the Mountains of Rain and Night and venturing deep into enemy territory to spy. After all, the winner of this war could be determined by one wrong move.
At the Battle of Hackham Heath, the fate of a Kingdom will be decided. This origin story of how Halt came to be Araluen's most famous Ranger - and how war will decide the future of the next generation - will thrill Ranger's Apprentice fans and new readers alike.

John Flanagan grew up in Sydney, Australia, hoping to be a writer, and after a successful career in advertising and television, he began writing a series of short stories for his son, Michael, in order to encourage him to read. Those stories would eventually become The Ruins of Gorlan, Book 1 of the Ranger's Apprentice epic. Together with his companion series, Brotherband Chronicles, the novels of John Flanagan have sold millions of copies and made readers of kids the world over. Mr. Flanagan lives in the suburb of Manly, Australia, with his wife. In addition to their son, they have two grown daughters and four grandsons. You can visit John Flanagan at www.WorldofJohnFlanagan.com