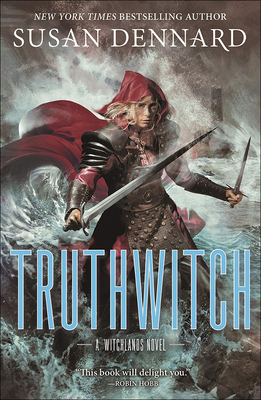 By Susan Dennard
$21.80
Available to Order - Usually Arrives in Our Store in 4 to 7 Days

Two best friends use their magic to save the world from war and corruption in Susan Dennard's "New York Times" bestselling YA fantasy, "Truthwitch."

"On a continent ruled by three empires, some are born with a "witchery," a magical skill that sets them apart from others. "
""
In the Witchlands, there are almost as many types of magic as there are ways to get in trouble as two desperate young women know all too well.

Safiya is a Truthwitch, able to discern truth from lie. It's a powerful magic that many would kill to have on their side, especially amongst the nobility to which Safi was born. So Safi must keep her gift hidden, lest she be used as a pawn in the struggle between empires.

Iseult, a Threadwitch, can see the invisible ties that bind and entangle the lives around her but she cannot see the bonds that touch her own heart. Her unlikely friendship with Safi has taken her from life as an outcast into one of reckless adventure, where she is a cool, wary balance to Safiya's hotheaded impulsiveness.

Safiya and Iseult just want to be free to live their own lives, but war is coming to the Witchlands. With the help of the cunning Prince Merik (a Windwitch and privateer) and the hindrance of a Bloodwitch bent on revenge, the friends must fight emperors, princes, and mercenaries alike, who will stop at nothing to get their hands on a Truthwitch.

SUSAN DENNARD has come a long way from small-town Georgia. As a marine biologist, she got to travel the world six out of seven continents, to be exact (she'll get to Asia one of these days!) before she settled down as a full-time novelist and writing instructor. She lives in the Midwest with her husband and two dogs, and is extremely active in social media. You can find her on her blog, Twitter, or Misfits & Daydreamers, a weekly newsletter on all things books and writing. She is the author of the Something Strange and Deadly series."