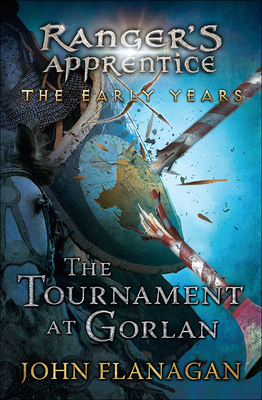 By John Flanagan
$19.80
Special Request - May Not Be Available

A "New York Times" bestseller
From John Flanagan, author of the worldwide bestselling Ranger's Apprentice (soon to be a major motion picture) the first in a new prequel series featuringone of our favorite Rangers, Halt
When Halt and Crowley discover that the ambitious Morgarath has been infiltrating the Rangers in order to corrupt the Corps, the young Rangers travel north to find Prince Duncan, seeking a royal warrant to stop Morgarath before it is too late. By weakening the Rangers, the most powerful force in support of the King, Morgarath plans to steal the throne.
Yet when Halt and Crowley arrive in Gorlan, they discover just how close Morgarath's scheme is to success. Morgarath has a plan to discredit the Prince and alienate him from his father. At the same time, the Baron of Gorlan has been conspiring to win the trust and admiration of the Council of Barons to further his plan. If the young Rangers are to prevent the coup from succeeding, they will have to tread a dangerous path, which leads them to a thrilling climax at the annual tournament at Gorlan, where a series of bitter duels must be fought and won.
This origin story brings readers to a time before Will was an apprentice, and lays the groundwork for the epic battles that will culminate with "The Ruins of Gorlan "and "The Burning Bridge" Books 1 and 2 of the Ranger's Apprentice series.

John Flanagangrew up in Sydney, Australia, hoping to be a writer, and after a successful career in advertising and television, he began writing a series of short stories for his son, Michael, in order to encourage him to read. Those stories would eventually become"The Ruins of Gorlan," Book 1 of the Ranger s Apprentice epic. Together with his companion series, Brotherband Chronicles, the novels of John Flanagan have sold millions of copies and made readers of kids the world over.Mr. Flanagan lives in the suburb of Manly, Australia, with his wife. In addition to their son, they have two grown daughters and four grandsons.