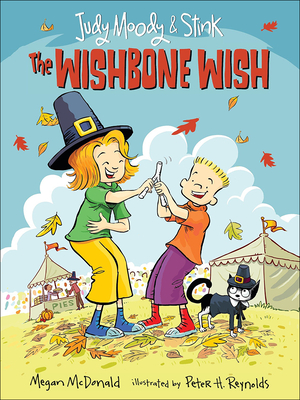 On your mark, get set, Gobblers-a-Go-Go Judy swears she ll win the race for a Thanksgiving turkey (though Stink has his doubts) in this full-color Moody adventure.
The town's annual Turkey Trot race and festival is coming up, and Judy and Stink are training to win. Judy has decided that she is going to take home the big prize: a fat, juicy turkey. They can taste it already: the moist turkey, the hot gravy, the savory stuffing, the cranberry sauce "Beep Beep Beep "That's the sound of Stink's Rapidfire Ultra XE611M25 stopwatch going off as Judy and Stink hop, crawl, and climb toward race day. But what if they "don t" win a mouthwatering bird? What then? Flying turkey gizzards " "Will the Moody family end up starving on T-day, like ye pilgrims of olde, or will Grandma Lou cook up a tasty Franksgiving solution?
Megan McDonald is the creator of the popular and award-winning Judy Moody and Stink series. She is also the author of three Sisters Club stories, "Ant and Honey Bee: A Pair of Friends at Halloween, Ant and Honey Bee: A Pair of Friends in Winter, "and many other books for children. She lives in Sebastopol, California.

Peter H. Reynolds is the illustrator of the Stink and Judy Moody books and the author-illustrator of many picture books, including "The Dot, Ish, Sky Color, "and" The Smallest Gift of Christmas. "Born in Canada, he now lives in Dedham, Massachusetts.