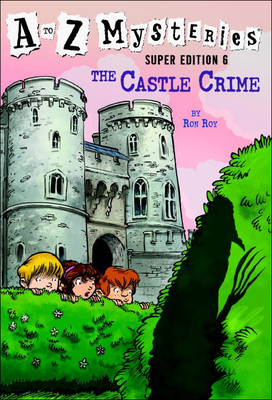 This is book number 6 in the A to Z Mysteries Super Editions series.

In the sixth A to Z Mysteries Super Edition, Dink, Josh, and Ruth Rose go to London The kids see Big Ben, ride the London Eye, and tour Madame Tussauds wax museum. Then big news hits--someone has stolen Queen Elizabeth's jewels right outside Windsor Castle The kids head to the castle to check around for clues. But can three kids from Green Lawn possibly find evidence that Scotland Yard has missed? The alphabet is over, but the mysteries continue in this sixth" A to Z Mysteries Super Edition, "featuring a 26-letter secret message hidden in the illustrations.
RON ROY has been writing books for children since 1974. He is the author of dozens of books, including the popular A to Z Mysteries and Capital Mysteries series. When not working on a new book, Ron likes to teach tricks to his dog Pal, play poker with friends, travel, and read thrilling mystery books.

JOHN STEVEN GURNEY has illustrated many books for children, including the entire A to Z Mysteries series and Scholastic's popular Bailey School Kids series.