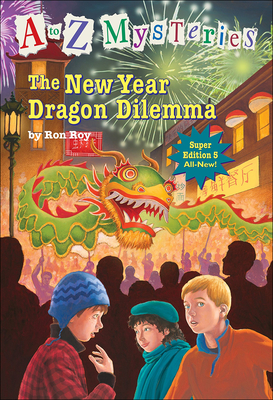 This is book number 5 in the A to Z Mysteries Super Editions series.

Dink, Josh, and Ruth Rose are in San Francisco, home of the biggest Chinatown outside of Asia Their tour guide, Holden, is going to take them to the famous Chinese New Year parade. Best of all, Holden's girlfriend, Lily, is Miss Chinatown. She gets to ride a giant float and wear a crown But during the parade, Lily goes missing, and so does the crown. The police think Holden did it. Can Dink, Josh and Ruth Rose clear their friend's name by finding the real crook? The alphabet is over, but the mysteries continue in this fourth A to Z Mysteries Super Edition, featuring a secret message hidden in the illustrations.