Youtube: An Insider's Guide to Climbing the Charts (Paperback) 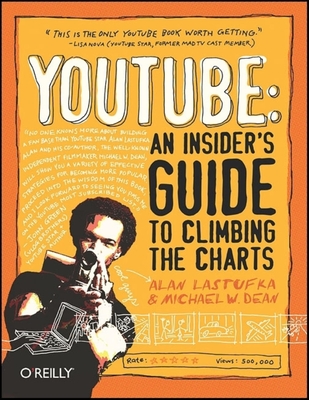 Youtube: An Insider's Guide to Climbing the Charts (Paperback)

Want to make a splash on YouTube? Even go viral? You've come to the right place. This book is written by two veteran 'Tubers who live their art and know what they're talking about -- especially Alan Lastufka, a.k.a. fallofautumndistro, who has over 13,000 YouTube subscribers and over 4 million views. Alan and co-author Michael W. Dean show you how to make a quality video, and how to optimize, encode, upload, and promote it. This book can't promise you'll be rich and famous, but it can tell you how to make great video art, and what you need to do to get your work seen. You'll learn about:

Join Alan, who makes part of his living from YouTube, and Michael, a successful filmmaker, author, and D.I.Y. art pioneer. They'll take you from the basics of gear to making it big on YouTube, with a focus on networking and interaction. You'll also sit in on informative interviews with YouTube stars LisaNova, Hank Green (vlogbrothers), WhatTheBuckShow, nalts, and liamkylesullivan.

Alan and Michael understand viral marketing -- and they know what it takes to get your work on everyone's YouTube radar. And, once you read this book, so will you.

Alan Lastufka a.k.a. fallofautumndistro (YouTube user name), is one of the Top 100 Most Subscribed Comedians on YouTube. His YouTube videos have had more than three million total views. One of his early short films received multiple airings on the Independent Film Channel. On YouTube, Lastufka is widely praised for his collaboration videos. One of the most popular is the iPwn iPhone parody commercial, starring MadTV cast member LisaNova (as well as some narration at the end that was engineered and produced by Michael Dean). CNN and YouTube held presidential debates on national television comprised solely of questions submitted by YouTubers via video. On July 23, 2007 U.S. Senator Christopher J. Dodd (D-Connecticut) made a YouTube video response answering a question on the subject of Net Neutrality submitted by Alan Lastufka: http: //www.youtube.com/watch?v=BiiCR0​USyJgLastufka has contributed articles to numerous international magazines and zines, while co-running a popular independent publishing project in Chicago, IL.: www.fallofautumn.comAlan is currently a teacher and skills coach for a non-profit social services agency.Michael W. Dean is very active on YouTube. His DIY or DIE video( http: //www.youtube.com/watch?v=PtX09q9​SCXw ) was featured by the YouTube staff, and has had over 28,000 views. DIY or DIE was one of four staff-featured vodcasts on the launch of the Zune Marketplace (along with Ask A Ninja and Diggnation).Dean is an independent filmmaker who has written for Make Magazine, writes for the O'Reilly Digital Media site and runs the pop culture blog, StinkFight.com. He was a contributor to the O'Reilly book Digital Video Hacks, and edited the O'Reilly book DV Filmmaking: From Start to Finish.Michael has sold over a million dollars' worth of books. He is the author of the how-to books $30 Film School, $30 Music School and $30 Writing School. $30 Film School has gained a substantial cult following, just went into the third printing of the second edition, and is taught in colleges. Michael wrote the novels, The Simple Pleasures of a Complex Girl and Starving in the Company of Beautiful Women, and the popular Creative Commons eBook Digital Music - DIY Now! (released via blog post on BoingBoing.net to 50,000 downloads in the first week): http: //www.boingboing.net/2007/07/19/​free-ebook-digital-m.htmlMichael directed the documentary films D.I.Y. OR DIE: How To Survive as an Independent Artist and HUBERT SELBY JR: It/ll Be Better Tomorrow (narrated by Robert Downey Jr.). The Selby film was a featured selection in the 2005 Deauville Film Festival in France, and Michael traveled to present the film in person. This film was released on DVD by MVD in America. It was released as a two-disc set with Requiem for a Dream in the UK, and in Australia as a two-disc set with Last Exit To Brooklyn. Review of the film in Variety Magazine: http: //www.variety.com/review/VE11179281​94.html?categoryid=31&cs=1Michael toured America and Europe as the singer in the band BOMB (Warner Brothers). And more recently, he's toured America and Europe showing films and lecturing at youth centers, colleges and museums. Dean has been interviewed on NPR, BBC radio and CBC radio. He has been featured in Spin magazine and on VH1. He does three podcasts, and was a speaker at 2007 Podcast and New Media Expo.Michael has collaborated with co-author Alan Lastufka on several videos, by providing advice, as well as creating music and doing narration. Michael did the voiceover for Alan's popular parody video, Now That's What I Call Emo: YouTube Edition: http: //www.youtube.com/watch?v=1RDw9yx7​gEMwhich has had over 346,000 unique views.