Apartheid South Africa: An Insider's Overview of the Origin and Effects of Separate Development (Hardcover) 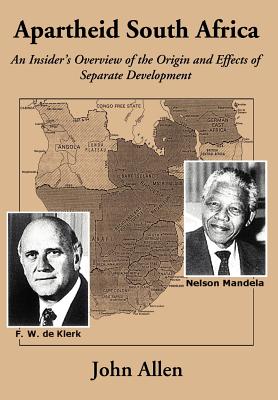 Apartheid South Africa: An Insider's Overview of the Origin and Effects of Separate Development (Hardcover)


Available to Order - Usually Arrives in Our Store in 4 to 7 Days
Although British-born, John Allen lived in South Africa from 1954 to 1990, a 36-year period during which the country experienced its most climactic--and sometimes terrible--events.

Speaking from firsthand knowledge and with an intimate understanding of the situation, the author takes us beyond the media hype that so dominated Western television screens to answer some of the most vital questions concerning the apartheid era:

Apartheid South Africa addresses these and a host of other issues, bringing to light little-known facts concerning historical detail and providing the reader with eyewitness accounts of day-to-day life in one of the most dangerous countries in the world.