Any Other Family (Large Print / Paperback) 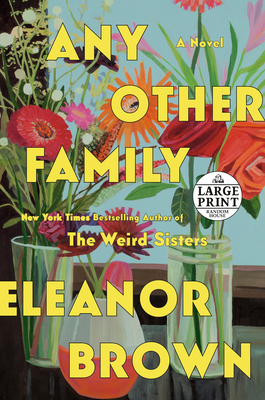 Any Other Family (Large Print / Paperback)


Coming Soon - Available for Pre-Order Now
The New York Times bestselling author of The Weird Sisters returns with an enticing and intimate new novel about three different women connected through their adopted children who must face the ultimate question: What truly binds a family?

They look just like any other family. Parents, siblings, cousins, aunts, and uncles. But that’s not quite right when it comes to the Basnight-Kowalski-Evans group. Rather, they are four biological siblings adopted across three sets of parents, all committed to keeping the family intact after the death of the children’s grandmother. Tabitha, who adopted the twins, is the planner of the group, responsible for coordinating playdates and birthdays and Sunday night dinners, and insistent that everything happens just so. Quiet and steady Ginger, single mother to the eldest daughter, is resistant to the forced togetherness, wary from her own chaotic childhood of big personalities. And Elizabeth is still reeling from the whirlwind of going from rounds of failed IVF right into adopting a newborn, and is terrified that, after all this time, she in fact hates being a mother.

But when all three receive a surprising call from the children’s birth mother, the delicate bonds they’ve managed to form threaten to collapse. The birth mother is pregnant again, and no one can decide on who should adopt the new baby. Stuck in a stalemate, the family is forced to consider the possibility of bringing new parents into the fold, and as tensions rise, they are each confronted with their own individual reckonings on what exactly it means to be a mother.

Set across the span of a two-week family vacation, one full of boisterous laughter and emotional upheaval, Any Other Family is a thought-provoking and poignant look at how families shift and evolve and a striking portrait of motherhood in all its forms.
Eleanor Brown is the New York Times bestselling author of The Weird Sisters and The Light of Paris, and the editor of the anthology, A Paris All Your Own.  She holds an M.A. in Literature and teaches writing workshops at writing conferences and centers nationwide. Born and raised in the Washington, D.C. area, Eleanor lives with her family in Highlands Ranch, Colorado.