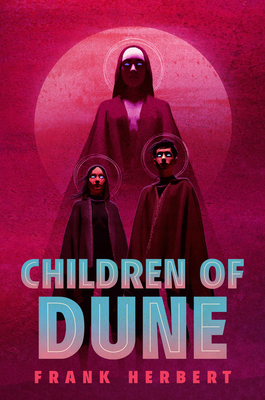 This is book number 3 in the Dune series.

This deluxe hardcover edition of Children of Dune includes:
• An iconic new cover
• A stamped and foiled case featuring a quote from the Litany Against Fear
• Stained edges and fully illustrated endpapers
• A beautifully designed poster on the interior of the jacket
• An Introduction by Brian Herbert

The Children of Dune are twin siblings Leto and Ghanima Atreides, whose father, the Emperor Paul Muad’Dib, disappeared in the desert wastelands of Arrakis nine years ago. Like their father, the twins possess supernormal abilities—making them valuable to their manipulative aunt Alia, who rules the Empire in the name of House Atreides.

Facing treason and rebellion on two fronts, Alia’s rule is not absolute. The displaced House Corrino is plotting to regain the throne while the fanatical Fremen are being provoked into open revolt by the enigmatic figure known only as The Preacher. Alia believes that by obtaining the secrets of the twins’ prophetic visions, she can maintain control over her dynasty.

But Leto and Ghanima have their own plans for their visions—and their destinies....
Frank Herbert is the bestselling author of the Dune saga. He was born in Tacoma, Washington, and educated at the University of Washington, Seattle. He worked a wide variety of jobs—including TV cameraman, radio commentator, oyster diver, jungle survival instructor, lay analyst, creative writing teacher, reporter and editor of several West Coast newspapers—before becoming a full-time writer.

In 1952, Herbert began publishing science fiction with “Looking for Something?” in Startling Stories. But his emergence as a writer of major stature did not occur until 1965, with the publication of Dune. Dune Messiah, Children of Dune, God Emperor of Dune, Heretics of Dune, and Chapterhouse: Dune followed, completing the saga that the Chicago Tribune would call “one of the monuments of modern science fiction.” Herbert is also the author of some twenty other books, including The White Plague, The Dosadi Experiment, and Destination: Void. He died in 1986.

Praise for Children of Dune

“Ranging from palace intrigue and desert chases to religious speculation and confrontations with the supreme intelligence of the universe, there is something here for all science fiction fans.”—Publishers Weekly

“Herbert adds enough new twists and turns to the ongoing saga that familiarity with the recurring elements brings pleasure.”—Challenging Destiny

“I know nothing comparable to it except Lord of the Rings.”—Arthur C. Clarke

“A portrayal of an alien society more complete and deeply detailed than any other author in the field has managed...a story absorbing equally for its action and philosophical vistas.”—The Washington Post Book World

“One of the monuments of modern science fiction.”—Chicago Tribune

“Powerful, convincing, and most ingenious.”—Robert A. Heinlein

“Herbert’s creation of this universe, with its intricate development and analysis of ecology, religion, politics and philosophy, remains one of the supreme and seminal achievements in science fiction.”—Louisville Times