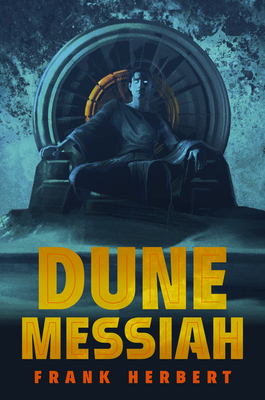 This is book number 2 in the Dune series.

This deluxe hardcover edition of Dune Messiah includes:
• An iconic new cover
• A stamped and foiled case featuring a quote from the Litany Against Fear
• Stained edges and fully illustrated endpapers
• A beautifully designed poster on the interior of the jacket
• An Introduction by Brian Herbert

Dune Messiah continues the story of Paul Atreides, better know—and feared—as the the man called Muad’Dib. As Emperor of the known universe, Paul possesses more power than a single man was ever meant to wield. Worshipped as a religious icon by the fanatical Fremen, Paul faces the enmity of the political houses he displaced when he assumed the throne—and a conspiracy conducted within his own sphere of influence.

And even as House Atreides begins to crumble around him from the machinations of his enemies, the true threat to Paul comes to his lover, Chani, and the unborn heir to his family’s dynasty....
Frank Herbert was the bestselling author of the Dune saga. He was born in Tacoma, Washington, and educated at the University of Washington, Seattle. He worked a wide variety of jobs—including TV cameraman, radio commentator, oyster diver, jungle survival instructor, lay analyst, creative writing teacher, reporter and editor of several West Coast newspapers—before becoming a full-time writer.

In 1952, Herbert began publishing science fiction with “Looking for Something?” in Startling Stories. But his emergence as a writer of major stature did not occur until 1965, with the publication of Dune. Dune Messiah, Children of Dune, God Emperor of Dune, Heretics of Dune, and Chapterhouse: Dune followed, completing the saga that the Chicago Tribune would call “one of the monuments of modern science fiction.” Herbert was also the author of some twenty other books, including The White Plague, The Dosadi Experiment, and Destination: Void. He died in 1986.

“Brilliant...it is all that Dune was, and maybe a little more.”—Galaxy Magazine

“I know nothing comparable to it except Lord of the Rings.”—Arthur C. Clarke

“A portrayal of an alien society more complete and deeply detailed than any other author in the field has managed...a story absorbing equally for its action and philosophical vistas.”—The Washington Post Book World

“One of the monuments of modern science fiction.”—Chicago Tribune

“Powerful, convincing, and most ingenious.”—Robert A. Heinlein

“Herbert’s creation of this universe, with its intricate development and analysis of ecology, religion, politics and philosophy, remains one of the supreme and seminal achievements in science fiction.”—Louisville Times