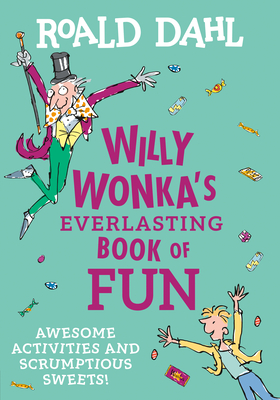 
On Our Shelves Now
How do you make a chocolate milkshake?

You give it a fright!

Keep boredom at bay with Willy Wonka as your host in Willy Wonka's Everlasting Book of Fun. Filled with practical jokes, activities, and fun recipes for any occassion, this book is perfect for fans who want to bring the excitement of the Chocolate Factory to life!
Roald Dahl (1916-1990) was born in Wales of Norwegian parents. He spent his childhood in England and, at age eighteen, went to work for the Shell Oil Company in Africa. When World War II broke out, he joined the Royal Air Force and became a fighter pilot. At the age of twenty-six he moved to Washington, D.C., and it was there he began to write. His first short story, which recounted his adventures in the war, was bought by The Saturday Evening Post, and so began a long and illustrious career.
After establishing himself as a writer for adults, Roald Dahl began writing children's stories in 1960 while living in England with his family. His first stories were written as entertainment for his own children, to whom many of his books are dedicated.
Roald Dahl is now considered one of the most beloved storytellers of our time. Although he passed away in 1990, his popularity continues to increase as his fantastic novels, including James and the Giant Peach, Matilda, The BFG, and Charlie and the Chocolate Factory, delight an ever-growing legion of fans.

Quentin Blake is a well-known artist whose work has made him popular on both sides of the Atlantic. He has illustrated most of Roald Dahl's children's books as well as many others. He lives in London, where he teaches illustration at the Royal College of Art.