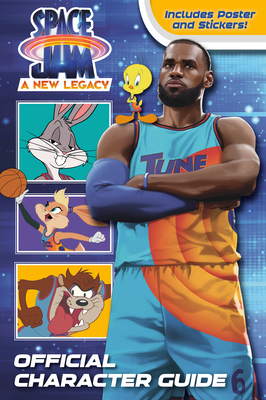 
Available to Order - Usually Arrives in Our Store in 4 to 7 Days
An all-new, full-color character guide based on Space Jam: A New Legacy, starring LeBron James and the Looney Tunes!

Basketball superstar LeBron James teams up with Bugs Bunny and the Looney Tunes for Space Jam: A New Legacy, the long-awaited reimagining of the original, beloved film. Boys and girls ages 6 to 11 will love this full-color guide that introduces all the superstars, heroes, and villains from the hit Warner Bros. movie--plus it includes stickers and a poster!
David Lewman is a children’s book author who has written more than 65books starring SpongeBob SquarePants, Jimmy Neutron, the Fairly OddParents, G.I. Joe, the Wild Thornberrys, and other popular characters. His works include Batter Up!, Drop the Beat!, and The Knight Before Christmas.

Established in July 2013 in a merger between Penguin and Random House, Penguin Random House, with nearly 250 independent imprints and brands on five continents, more than 15,000 new titles published each year, and close to 800 million print, audio, and eBooks sold annually, is the world’s leading trade book publisher. Like its predecessor companies, Penguin Random House is committed to publishing adult and children’s fiction and nonfiction print editions and is a pioneer in digital publishing. Its publishing lists include more than 60 Nobel Prize laureates and hundreds of the world’s most widely read authors.