Who Was John McCain? (Who Was?) (Hardcover) 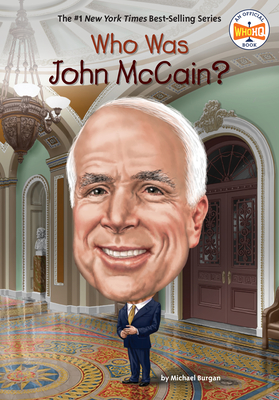 Who Was John McCain? (Who Was?) (Hardcover)


Coming Soon - Available for Pre-Order Now
How did the son of a naval officer go on to become a United States Navy captain, an Arizona senator, and a candidate for president? Find out in this addition to the #1 New York Times best-selling Who Was? series!

In 2008, John McCain ran for president against Barack Obama, becoming a well-known national figure. But his presidential campaign was only one of the many inspirational things John accomplished in his lifetime! John was a decorated member of the US Navy who survived being a prisoner of war in Vietnam. He served as an Arizona senator for thirty years, right up until his passing in 2018. Learn all about John McCain and his life as politician who always tried to work across the aisle and to treat people fairly in this book about the maverick patriot.
Michael Burgan has written more than two dozen nonfiction books for young readers, including What Is the Coronavirus Disease COVID-19?, Who Was Henry Ford?, What Is the Story of Dracula?, Who Was Theodore Roosevelt, and Who Was Confucius?