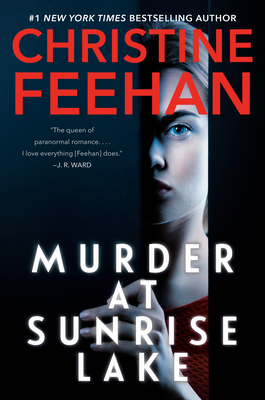 
Available to Order - Usually Arrives in Our Store in 4 to 7 Days
#1 New York Times bestselling author Christine Feehan reaches new heights of passion and suspense in this thrilling novel that takes readers deep into the California backcountry, where a woman is tormented by visions of a killer.

It starts in her dreams. Hideous flashes from a nightmare only she can stop. Images of a murderer stalking the ones she cares about most…

Stella Harrison thought she got away from the traumas of her past. Running the Sunrise Lake resort high in the Sierra Nevada mountains has brought her peace, even though she doesn’t truly share her quiet life with anyone. Not even Sam, the hired handyman that notices everything and always seems to know exactly what she needs.

Stella doesn’t know anything about Sam’s past, but somehow over the last two years his slow, steady presence has slipped past her defenses. Still, she knows she can’t tell him about her recent premonitions. So far there’s been no murder. No body. No way to prove what’s about to happen without destroying the life she’s built for herself.

But a killer is out there. And Stella knows that this time she’ll do whatever it takes to stop him.
Christine Feehan is the #1 New York Times bestselling author of the Carpathian series, the GhostWalker series, the Leopard series, the Shadow Riders series, and the Sea Haven novels, including the Drake Sisters series and the Sisters of the Heart series.

"Bestseller Feehan (Lightning Game) expertly reels in readers for a rip-roaring thrill ride in this spectacular standalone...Feehan ramps up the tension early and keeps it climbing until the very end, masterfully throwing out red herrings that will keep readers guessing. The riveting plot strikes a fine balance between romance and danger. Add in irresistible characters, and readers won’t be able to turn the pages fast enough."—Publishers Weekly, starred review