B Is for Broadway: Onstage and Backstage from A to Z (Hardcover) 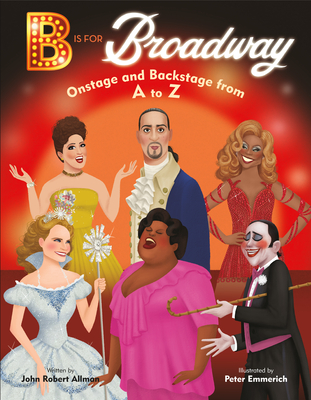 B Is for Broadway: Onstage and Backstage from A to Z (Hardcover)


On Our Shelves Now
“A must-have for all Broadway lovers—B Is for Broadway—a book I am actually in!!! I am buying a dozen.” —ROSIE O’DONNELL, Isabelle Stevenson Award recipient, three-time Tony Awards host, and Emmy Award winner

New from the creators of A Is for Audra: Broadway's Leading Ladies from A to Z!

From AUDITIONS to ZIEGFELD, grab a ticket to this smash-hit, rhythmic alphabet book featuring your favorite performers, creators, songs, and shows from the Broadway stage!

Step into the spotlight and celebrate a cavalcade of Broadway legends! Start with "A" for "audition" with the iconic line-up from A Chorus Line, then peek behind "B" to see the "backstage" buzz, and dance along with "C" for "choreographers".

Children and grown-ups alike can spot beloved stars and creators from today and yesterday, such as Lin-Manuel Miranda, Patti LuPone, Michael Bennett, Jennifer Holliday, Ethel Merman, and Billy Porter. Readers will also see famous New York theaters, beloved shows such as Hamilton and Hairspray, and the crew, stylists, and technicians who are vital to each performance. It's a celebration of the American stage that no fan is going to want to miss.

A portion of the proceeds from the sale of this book is donated to The Actors Fund.

“We are honored that a portion of the proceeds of author John Robert Allman and illustrator Peter Emmerich’s B is For Broadway will go to support our programs. The Actors Fund is proud to be at the forefront of helping everyone in the entertainment community with emergency financial assistance and supportive services, and we’re grateful that this wonderful new work will help those in need in our performing arts community.” —Joseph P. Benincasa, President & CEO, The Actors Fund

B Is for Broadway is a hit with the stage's greatest stars!

“B Is for Broadway celebrates the entire Broadway community—backstage, onstage, everyone! who works in our performing arts and entertainment community. I’m honored to be a part of that beautiful community, and this lovely book.” —BEBE NEUWIRTH, Tony and Emmy Award–winning dancer, singer, actress (Sweet Charity, Chicago, Cheers), and Vice Chair of The Actors Fund

“The illustrations—gorgeous. The rhymes—delicious. This book—a must-have! B is for Broadway and buy-it-now!” —KRISTIN CHENOWETH, Tony Award–winning actress (You’re a Good Man, Charlie Brown)

“What a dynamite willkommen to the world of Broadway!” —JOEL GREY, Tony Award and Oscar–winning actor (Cabaret)

“B Is for Broadway is a gorgeous children’s book that will introduce a young person to all the magic of theater!” —ALI STROKER, Tony Award–winning actress (Oklahoma!)
JOHN ROBERT ALLMAN is the author of A Is for Audra: Broadway's Leading Ladies from A to Z and B Is for Broadway: Onstage and Backstage from A to Z, plus three picture books with the American Ballet Theatre: Boys Dance!, B Is for Ballet: A Dance Alphabet, and The Night Before the Nutcracker. He lives in New York City, where is works in marketing for television and theater. John is a graduate of Northwestern University, New York University's Stern School of Business, and BMI's Musical Theatre Workshop. Follow him on Twitter and Instagram at @Johnny_Allman.

PETER EMMERICH is the illustrator of A Is for Audra: Broadway's Leading Ladies from A to Z and B Is for Broadway: Onstage and Backstage from A to Z. He has worked with DreamWorks and the Walt Disney Company, for which he illustrated the U.S. Postal Service's "Art of Disney" stamp series. Peter is a graduate of the Fashion Institute of Technology. Follow him on Instagram at @peteremmerich.

"If A is for Audra is a crash course in Diva Studies, [B Is for Broadway] is a syllabus for showbiz."—Playbill

"Take your seats. No tickets needed for this entertaining performance."—Kirkus

"Theater stars spring to life on the pages of B Is for Broadway."—NPR, All Things Considered