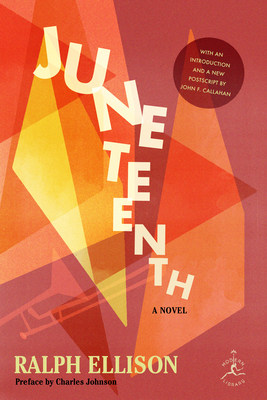 
Available to Order - Usually Arrives in Our Store in 4 to 7 Days
The radiant, posthumous second novel by the visionary author of Invisible Man, featuring an introduction and a new postscript by Ralph Ellison's literary executor, John F. Callahan, and a preface by National Book Award-winning author Charles Johnson

“Ralph Ellison’s generosity, humor and nimble language are, of course, on display in Juneteenth, but it is his vigorous intellect that rules the novel. . . . A majestic narrative concept.”—Toni Morrison

In Washington, D.C., in the 1950s, Adam Sunraider, a race-baiting senator from New England, is mortally wounded by an assassin’s bullet while making a speech on the Senate floor. To the shock of all who think they know him, Sunraider calls out from his deathbed for Alonzo Hickman, an old black minister, to be brought to his side. The reverend is summoned; the two are left alone. “Tell me what happened while there’s still time,” demands the dying Sunraider.

Out of their conversation, and the inner rhythms of memories whose weight has been borne in silence for many long years, a story emerges. Senator Sunraider, once known as Bliss, was raised by Reverend Hickman in a black community steeped in religion and music (not unlike Ralph Ellison’s own childhood home) and was brought up to be a preaching prodigy in a joyful black Baptist ministry that traveled throughout the South and the Southwest. Together one last time, the two men retrace the course of their shared life in an “anguished attempt,” Ellison once put it, “to arrive at the true shape and substance of a sundered past and its meaning.” In the end, the two men confront their most painful memories, memories that hold the key to understanding the mysteries of kinship and race that bind them, and to the senator’s confronting how deeply estranged he had become from his true identity.

In Juneteenth, Ralph Ellison evokes the rhythms of jazz and gospel and ordinary speech to tell a powerful tale of a prodigal son in the twentieth century. At the time of his death in 1994, Ellison was still expanding his novel in other directions, envisioning a grand, perhaps multivolume, story cycle. Always, in his mind, the character Hickman and the story of Sunraider’s life from birth to death were the dramatic heart of the narrative. And so, with the aid of Ellison’s widow, Fanny, his literary executor, John Callahan, has edited this magnificent novel at the center of Ralph Ellison’s forty-year work in progress—its author’s abiding testament to the country he so loved and to its many unfinished tasks.
Ralph Ellison was born in Oklahoma City in 1914. He is the author of the novel Invisible Man (1952), winner of the National Book Award and one of the most important and influential American novels of the twentieth century, as well as numerous essays and short stories. He died in New York City in 1994.

John F. Callahan is the Emeritus Professor at Lewis & Clark College. He has been the editor or writer of numerous volumes related to African American and twentieth-century literature. As Ralph Ellison’s literary executor, Callahan edited the Modern Library edition of The Collected Essays of Ralph Ellison.

Charles Johnson is the National Book Award-winning author of Middle Passage and Dreamer.

“For anyone who cares about American literature and the seemingly insolvable pain of race, Juneteenth is a must-read.”—USA Today

“Juneteenth is written with unmistakable Ellisonian zest, depth, and elegance. . . . The work holds together as a complete, aesthetically satisfying, and at times thrilling whole.”—The Atlantic

“Impressionistic, jazzy, and Faulknerian, assembled from stories inside of stories, dreams, flights of memory, and bolts of rhetoric.”—New York

“Ellison wrote better sentences than just about anybody. . . . Juneteenth is good the first time, better the second. His meanings slip and slide, they are associative, like American culture, where nothing is every quite what it seems, nor stays that way for long, and where absolutely nothing is purely black and white.”—Newsweek

“A stunning achievement . . . Juneteenth is a tour de force of untutored eloquence. Ellison sought no less than to create a Book of Blackness, a literary composition of the tradition at its most sublime and fundamental.”—Henry Louis Gates, Jr., Time