One Billion Americans: The Case for Thinking Bigger (Hardcover) 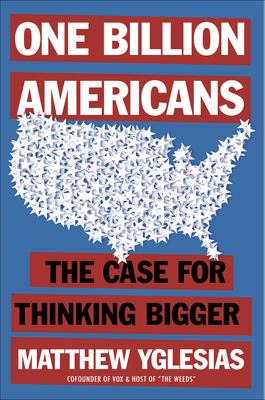 One Billion Americans: The Case for Thinking Bigger (Hardcover)


On Our Shelves Now
NATIONAL BESTSELLER

If the most challenging crisis in living memory has shown us anything, it’s that America has lost the will and the means to lead. We can’t compete with the huge population clusters of the global marketplace by keeping our population static or letting it diminish, or with our crumbling transit and unaffordable housing. The winner in the future world is going to have more—more ideas, more ambition, more utilization of resources, more people.

Exactly how many Americans do we need to win? According to Matthew Yglesias, one billion.

From one of our foremost policy writers, One Billion Americans is the provocative yet logical argument that if we aren’t moving forward, we’re losing. Vox founder Yglesias invites us to think bigger, while taking the problems of decline seriously. What really contributes to national prosperity should not be controversial: supporting parents and children, welcoming immigrants and their contributions, and exploring creative policies that support growth—like more housing, better transportation, improved education, revitalized welfare, and climate change mitigation. Drawing on examples and solutions from around the world, Yglesias shows not only that we can do this, but why we must.

Making the case for massive population growth with analytic rigor and imagination, One Billion Americans issues a radical but undeniable challenge: Why not do it all, and stay on top forever?
Matthew Yglesias is the co-founder and senior correspondent for Vox. He also hosts the political podcast “The Weeds” and is a regular contributor to NPR's All Things Considered. Prior to Vox, he was a columnist for Slate, a senior fellow at the Center for American Progress, and wrote for The American Prospect and The Atlantic. A New York City native, he currently lives in Washington, DC.

"Many economics books devote themselves to cataloging the world’s ills, and then end with a curiously short 'solutions' chapter that doesn’t really solve most of the problems in the book. One Billion Americans is a novel twist on this model. It . . . dives into a long catalog of solutions. Most of them are very good ideas."—The New York Times Book Review

"An argument that blends demography, economics, and politics . . . The thesis is eminently arguable, but the book is packed full of provocative ideas well worth considering."—Kirkus Reviews, starred review

"Well researched and convincing. This optimistic call to action is worth considering."—Publishers Weekly

"There are plenty of reasons to question how the U.S. might absorb so many new citizens, but Yglesias makes a provocative case for a new kind of American greatness."—The New York Times The Morning newsletter

“The genius of this book is in showing that dilemmas that are siloed across vast swaths of public policy are actually the same problem, with linked solutions. A bracing, ambitious manifesto that will leave you excited about the future that America could build, and furious at the weakness and decline so-called ‘nationalists’ want to ensure.”—Ezra Klein, editor-at-large and cofounder of Vox, bestselling author of Why We’re Polarized

“One Billion Americans points to the practical changes that the United States can make in order to earn back its inherited position as the leader on the path toward universal freedom and dignity. It warns us all that being the envy of the world is a choice, not a fate.”—Paul Romer, Nobel Prize–winning economist

“The goal of One Billion Americans is to make us think, and that is exactly what it does. How can America continue to be a global force? How can we make ‘American Exceptionalism’ a long-term reality? Matthew Yglesias does an amazing job serving up ideas, which we all need to seriously consider, in a book that is well worth reading.”—Mark Cuban, entrepreneur

“Yglesias is an unpredictable thinker, willing to fly in the face of tribal norms…One Billion Americans harkens back to a time when policy discussions were not tribal melees.”—National Review

"Argues persuasively for liberal policies in the service of a nation-building agenda . . . Yglesias walks the line successfully, managing not only to make a decisive case for several critical policies but also to confront some malignant beliefs historically present in liberal thought, all while appealing to  American national pride."—LiberalCurrents

“[Yglesias] ponders how the United States might evolve if it were much more open to immigrants…[and] makes a bold case for openness in his own country.”—The Economist

“The basic idea of the book, that America needs to commit to remaining the world's most powerful, productive nation, is a project that conservatives should emphatically support. Because Yglesias is right: We need more people.”—Washington Free Beacon

“Audacious, purposefully provocative, and yet utterly persuasive, One Billion Americans does what the best works of political nonfiction do, recalibrating not just our sense of what is possible, but of what is necessary. American decline isn’t inevitable, as much as it seems to be. We can avoid it, if we try.”—David Wallace-Wells, author of New York Times bestseller The Uninhabitable Earth

"One of those rare, sparkling books that sets out to argue a point that you are likely not to have a deeply settled opinion on, and then forces you to work through a whole series of interconnected views and assumptions you may not realize you had. Persuasive and fresh, even where it may fail to convince you, it succeeds in making you think. Really think."—Chris Hayes, host of "All In" on MSNBC and the "Why is this Happening?" podcast, author of A Colony in a Nation

"One Billion Americans is not just surpassingly intelligent—it’s also very clever: To support his plea for a much larger population, Yglesias sneaks in remedies for nearly every domestic policy failure that now besets us. In the process of arguing for a nation with more people, he provides the tools to build one that is also more prosperous and more equitable. This is an original, engaging, and necessary book."—Daniel Okrent, author of The Guarded Gate and Last Call


“Yet the wide range of contributors of Yglesias’s plans—market economists, social democrats, socialists, even communitarian conservatives—suggest that there may be a wider audience for these ideas than at first appears. Maybe pandemic nihilism and the crumbling of American institutions have gotten to me, but this little book is at once hopeful and utterly depressing: A reminder that if there was consensus that the US possessed a common wealth, it could be grown beyond measure.”—Quartz
“Matt Yglesias’ new book, One Billion Americans, will be one of the most important books of the decade.”—Exponents