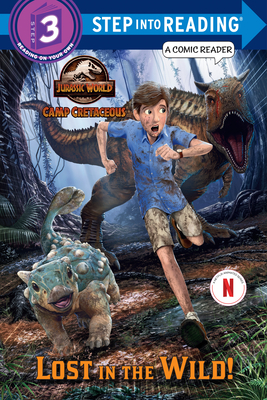 
Available to Order - Usually Arrives in Our Store in 4 to 7 Days
This Step into Reading Step 3 Comic Reader is based on the hit Netflix hit show Jurassic World: Camp Cretaceous!
Bonus content: Full-color poster!

Jurassic World: Camp Cretaceous follows a group of six teenagers chosen for a once-in-a-lifetime experience at a new adventure camp on the opposite side of Isla Nublar--the home of the Jurassic World theme park. But when dinosaurs wreak havoc across the island, the campers are stranded. Perfect for boys and girls ages 5 to 8, this Step 3 Step into Reading leveled reader is illustrated with action-packed comic panels that showcase the fearsome dinosaurs from the show--plus a fold-out Jurassic World: Camp Cretaceous poster!

Step 3 readers feature engaging characters in easy-to-follow plots about popular topics for children who are ready to read on their own.
Steve Behling is a writer who has words and isn't afraid to use them. He's written numerous books, magazines, and comics for a wide range of publishers including Disney Publishing Worldwide, DreamWorks, Golden Books, Marvel Press, Mattel, Silver Dolphin, and more. He's also a writer/editor for Creative Giant Puzzles and Games, a group specializing in the creation of custom puzzle content for kids. Steve lives in New York with his wife, two human children, and three-legged wonder beagle, Loomis.