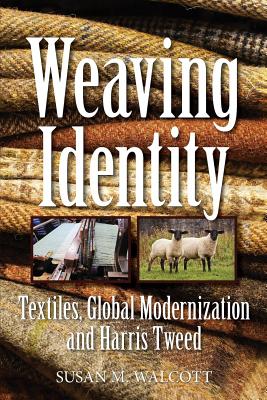 Creating an identity is crucial for survival, whether of individuals, countries or commercial products. Carefully selected elements combine positive pieces from the past to project a desired image into the present. Weaving Identity illustrates the process of transition through the tale of a special textile, as cloth manufacture typically triggers the movement from field to factory in an industrial revolution. Scotland's Harris Tweed, famously "hand woven in the Outer Hebrides", transformed national identities through two turbulent centuries. The culture and history of home weavers turning the color of their landscape into material for markets on the other side of the world form an integral part of a globe spanning story involving wars, famine, migrations, industrialization and modernization. Key characters include the Scottish tycoon who capitalized on his profits from the Opium War to break the 19thcentury power of China and buy the birthplace of Harris Tweed at the time of its creation. The tale concludes with the purchase of major shares in one of the few remaining tweed mills by an entrepreneur from resurgent China, Japan's emergence as a major market, and the Scots' struggle to preserve and take pride in their cultural symbols. Tales of textile production's involvement in the modernization of these countries, Japan, Thailand and Bhutan feature in other chapters. American examples include Pendleton and the role of Nike in tweed's rebirth. Colorful illustrations taken on location accompany the text.