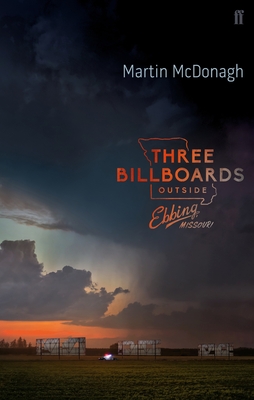 By Martin McDonagh
$15.95
On Our Shelves Now

The screenplay of the film starring Frances McDormand, Woody Harrelson, Sam Rockwell
After months pass without a culprit in her daughter's murder case, Mildred Hayes pays for three signs challenging the authority of William Willoughby, the town's revered chief of police. When his second-in-command, Officer Dixon, a mother's boy with a penchant for violence, gets involved, the battle between Mildred and Ebbing's law enforcement threatens to engulf the town. Three Billboards Outside Ebbing, Missouri is a darkly comedic drama from Martin McDonagh, nominated for six Golden Globes at the 75th Golden Globe Awards including Best Picture, Best Director and Best Actress, announced on December 11th 2017. It was nominated for 7 Oscars, including Best Actress in a leading role for Frances McDormand, Best Picture and Best Actor in a supporting role for Woody Harrelson, announced on the 23rd January 2018.

Martin McDonagh was born in London and has since worked as a playwright, screenwriter and film director. His first play, The Beauty Queen of Leenane, was nominated for six Tony awards, of which it won four, and the Laurence Olivier Award. In 2003, his play The Pillowman had its world premiere at the Royal National Theatre and received the 2004 Olivier Award. In 2006, Martin McDonagh won an Oscar for his short film Six Shooter. His most recent works include, A Behanding in Spokane, The Guard and Seven Psychopaths.