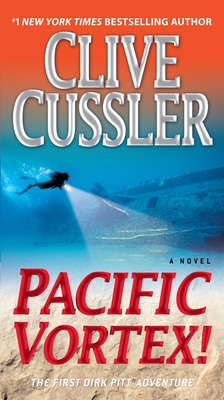 This is book number 6 in the Dirk Pitt Adventure series.

Dirk Pitt, death-defying adventurer and deep-sea expert, is put to the ultimate test as he plunges into the perilous waters of the Pacific Vortex—a fog-shrouded area where dozens of ships have vanished without a trace. The latest victim is the awesome supersub Starbuck, bearing America’s deep-diving nuclear arsenal. Its loss poses an unthinkable threat to national defense. Pitt’s job is to find it and salvage it before international forces beat him to the prize or the sea explodes in a nuclear blast—whichever comes first. Pitt’s mission also leads him into the arms of Summer Moran, the most stunningly exotic and dangerous woman ever to enter his life. As the countdown heads toward disaster, Pitt has no choice but to descend through the shark-infested depths to an ancient sunken island, from which he may never again emerge to see the light of day.


Clive Cussler is an accomplished marine archaeologist and the author of more than sixty action-adventure novels, many featuring deep-sea expert Dirk Pitt. He has been a #1 New York Times bestseller countless times over and continues to thrill his legions of fans worldwide.
“Dirk Pitt [is] oceanography’s answer to Indiana Jones.”—The Associated Press