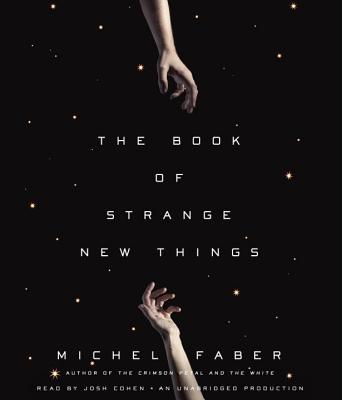 The Book of Strange New Things by Michel Faber will surely find itself on many 'Best of 2014' lists. It is at once deeply profound and a page-turner. Set in the near future, the multinational corporation USIC requires a Christian missionary for its settlement on a planet billions of miles away. The man chosen for the mission, Peter Leigh, a devout Christian with a sordid past and loving and deeply supportive wife arrives on the planet Oasis to discover a group of eager native converts, hungry for the Word of God. Their Christian names are simple and to the point: Jesus Lover One, Jesus Lover Two, etc. As Peter settles in to the relative haven of Oasis, life on Earth is going to hell. Catastrophic weather events, wars and economic collapse find Peter's wife Bea in increasingly desperate straights. The impossibly wide physical, emotional and spiritual distance between them is the heartbreaking core Faber's novel. It is a love song to life and a masterpiece born from anguish, as different a novel as one could imagine coming from the author of The Crimson Petal and the White, except for one crucial element—brilliance." ~Cathy

I've never read a book like this one. It's sci-fi in a lot of ways, but there is a great deal of spirituality in it given that the leading character is a a preacher requested by the occupants of Oasis, a small world millions of miles away from Earth. Alas, Pete (the preacher) was not able to bring his wife with him, which in another part of the drama of this book--marital strife caused by the terrible things that began to happen shortly after Peter launched for space. There is another angle about dealing with the indigenous beings, of which some wish to become Christians and most want to be nowhere near the Earthlings.  Frankly, most of the compound where the Earthlings are not crazy about being around the Oasan folks either, though they are producing the bulk of the food for the space station. This book will make you think, and the writing is lovely. It's a big book with a lot of big questions that seem to have no answers." ~Jackie

— Jackie is Book Blogger #1 at Tattered Cover. Her word is gold.

“Peter Leigh is an evangelical Christian pastor whose mission to serve the Lord leads him into space, where he ministers to an alien race. But is he truly converting them, or is his faith leading them astray? Questions abound: Why wasn't his wife allowed to accompany him? Why is everyone in the human base camp uninterested in the catastrophes that are befalling Earth while they are light years away? Why was Peter's appointment as pastor to the aliens so urgent? Faber does a great job addressing the question of faith and its consequences. A great book group selection!”
— Susan Taylor, Market Block Books, Troy, NY

A monumental, genre-defying novel that David Mitchell calls "Michel Faber's second masterpiece," The Book of Strange New Things is a masterwork from a writer in full command of his many talents. It begins with Peter, a devoted man of faith, as he is called to the mission of a lifetime, one that takes him galaxies away from his wife, Bea. Peter becomes immersed in the mysteries of an astonishing new environment, overseen by an enigmatic corporation known only as USIC. His work introduces him to a seemingly friendly native population struggling with a dangerous illness and hungry for Peter's teachings--his Bible is their "book of strange new things." But Peter is rattled when Bea's letters from home become increasingly desperate: typhoons and earthquakes are devastating whole countries, and governments are crumbling. Bea's faith, once the guiding light of their lives, begins to falter. Suddenly, a separation measured by an otherworldly distance, and defined both by one newly discovered world and another in a state of collapse, is threatened by an ever-widening gulf that is much less quantifiable. While Peter is reconciling the needs of his congregation with the desires of his strange employer, Bea is struggling for survival. Their trials lay bare a profound meditation on faith, love tested beyond endurance, and our responsibility to those closest to us. Marked by the same bravura storytelling and precise language that made The Crimson Petal and the White such an international success, The Book of Strange New Things is extraordinary, mesmerizing, and replete with emotional complexity and genuine pathos. From the Hardcover edition.

MICHEL FABER is the internationally bestselling and critically acclaimed author of The Crimson Petal and the White, Under the Skin--shortlisted for the Whitbread First Novel Award--and several other books. Faber has won many short story awards and his writing has appeared in Granta, The O. Henry Prize Stories, among others. He lives in Scotland.