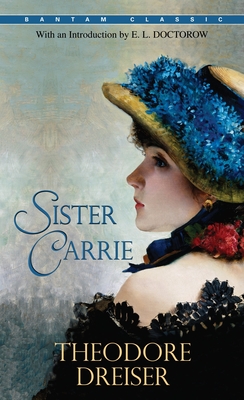 
Email or call for price. Handling fee may apply.
“When a girl leaves home at eighteen, she does one of two things. Either she falls into saving hands and becomes better, or she rapidly assumes the cosmopolitan standard of virtue and becomes worse.” With Sister Carrie, first published in 1900, Theodore Dreiser transformed the conventional “fallen woman” story into a genuinely innovative and powerful work of fiction. As he hurled his impressionable midwestern heroine into the throbbing, amoral world of the big city, he revealed, with brilliant insight, the deep and driving forces of American culture: the restless idealism, glamorous materialism, and basic spiritual innocence.

Sister Carrie brought American literature into the twentieth century. This volume, which reprints the text Dreiser approved for publication during his lifetime and includes a special appendix discussing his earlier, unedited manuscript, is the original standard edition of one of the great masterpieces of literary realism.
Theodre Dreiser was born into a large and impoverished German American family in Terre Haute, Indiana, in 1871. He began his writing career as a reporter, working for newspapers in Chicago. Pittsburg, and St. Louis, until an editor friend, Arthur Henry, suggested he write a novel. The result was Sister Carrie, based on the life of Dreiser’s own sister Emma, who had run off to New York with a married man. Rejected by several publishers as “immoral”, the book was finally accepted by Doubleday and Company, and published–over Frank Doubleday’s strong objections–in 1900.

Numerous cuts and changes had been made in the lengthy original manuscript by various hands, including those of Arthur Henry, Dreiser himself. Later, when given to mythologizing his career, Dreiser was to suggest that the publishing history of Sister Carrie had been one of bowdlerization and suppression only; but the publication of his unedited manuscript by the University of Pennsylvania Press in 1981 shows that Dreiser approved and even welcomed Henry’s and Jug’s alterations. (Whether the book was ultimately improved or compromised by their liberal editing is a fascinating and as yet unresolved issue among Dreiser scholars.) Sister Carrie sold poorly, but writers like Frank Norris and William Dean Howells saw it as a breakthrough in American realism, and Dreiser’s career as a novelist was launched.

The Financer (1912) and The Titan (1914) began his trilogy about the rise of a tycoon, but it was An American Tragedy (1925), based on newspaper accounts of a sensational murder case, which brought him fame. The novel was dramatized on Broadway and sold to Hollywood. Newly influential and affluent, Dreiser visited Russia and was unimpressed, describing his observations in the skeptical Dreiser Looks at Russia (1928). In later years, however, he became an ardent (through unorthodox) Communist, writing political Treatises such as America Is Worth Saving (1941) His artistic powers on the wane, Dreiser moved to Hollywood in 1939 and supported himself largely by the sale of film rights of his earlier works. He dies there, in 1945, at the age of seventy-four.