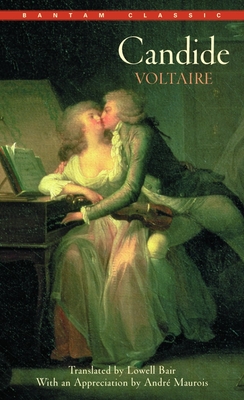 
On Our Shelves Now
Candide is the story of a gentle man who, though pummeled and slapped in every direction by fate, clings desperately to the belief that he lives in "the best of all possible worlds." On the surface a witty, bantering tale, this eighteenth-century classic is actually a savage, satiric thrust at the philosophical optimism that proclaims that all disaster and human suffering is part of a benevolent cosmic plan. Fast, funny, often outrageous, the French philosopher's immortal narrative takes Candide around the world to discover that -- contrary to the teachings of his distringuished tutor Dr. Pangloss -- all is not always for the best. Alive with wit, brilliance, and graceful storytelling, Candide has become Voltaire's most celebrated work.
Voltaire (François-Marie Arouet) (1694—1778) was one of the key thinkers of the European Enlightenment. Of his many works, Candide remains the most popular.

Peter Constantine was awarded the 1998 PEN Translation Award for Six Early Stories by Thomas Mann and the 1999 National Translation Award for The Undiscovered Chekhov: Forty-three New Stories. Widely acclaimed for his recent translation of the complete works of Isaac Babel, he also translated Gogol’s Taras Bulba and Tolstoy’s The Cossacks for the Modern Library. His translations of fiction and poetry have appeared in many publications, including The New Yorker, Harper’s, and Paris Review. He lives in New York City.
“When we observe such things as the recrudescence of fundamentalism in the United States, the horrors of religious fanaticism in the Middle East, the appalling danger which the stubbornness of political intolerance presents to the whole world, we must surely conclude that we can still profit by the example of lucidity, the acumen, the intellectual honesty and the moral courage of Voltaire.”
—A. J. Ayer