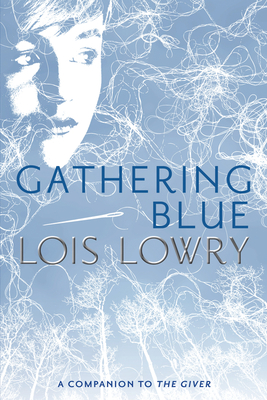 This is book number 2 in the Giver Quartet series.

The second book in Lois Lowry'sGiver Quartet tells the story of Kira, orphaned, physically flawed, and left with an uncertain future.

Gathering Blue, now stunningly redesigned in paperback, is the second book in the Giver Quartet which began with The Giver, the Newbery Medal winner in 1994. It tells the story of Kira, orphaned, physically flawed, and left with an uncertain future, and challenges readers to imagine what our world could become, how people could evolve, and what could be considered valuable.

Lois Lowry is the author of more than forty books for children and young adults, including the New York Times bestselling Giver Quartet and popular Anastasia Krupnik series. She has received countless honors, among them the Boston Globe-Horn Book Award, the Dorothy Canfield Fisher Award, the California Young Reader’s Medal, and the Mark Twain Award. She received Newbery Medals for two of her novels, Number the Stars and The Giver. Ms. Lowry lives in Maine.
www.loislowry.com
Twitter @LoisLowryWriter

"Lowry returns to the metaphorical future world of her Newbery-winning The Giver. . . . Plenty of material for thought and discussion here, plus a touch of magic and a tantalizing hint about the previous book’s famously ambiguous ending." (6/15/00) Kirkus Reviews with Pointers

"Lowry is a master at creating worlds, both real and imagined, and this incarnation of our civilization some time in the future is one of her strongest creations." —Booklist, starred review (6/1/00) Booklist, ALA, Starred Review —