The Prize: Who's in Charge of America's Schools? (Hardcover) 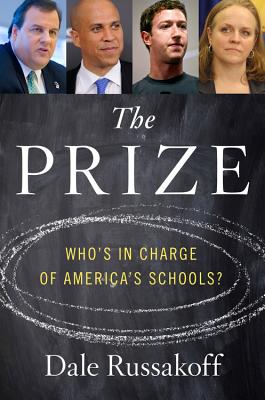 The Prize: Who's in Charge of America's Schools? (Hardcover)

Out of Print
A New York Times Bestseller


Mark Zuckerberg, Chris Christie, and Cory Booker were ready to reform our failing schools. They got an education.

When Mark Zuckerberg announced to a cheering Oprah audience his $100 million pledge to transform the downtrodden schools of Newark, New Jersey, then mayor Cory Booker and Governor Chris Christie were beside him, vowing to help make Newark “a symbol of educational excellence for the whole nation.” But their plans soon ran into the city’s seasoned education players, fierce protectors of their billion-dollar-a-year system. It’s a prize that, for generations, has enriched seemingly everyone, except Newark’s children.

Dale Russakoff delivers a riveting drama of our times, encompassing the rise of celebrity politics, big philanthropy, extreme economic inequality, the charter school movement, and the struggles and triumphs of schools in one of the nation’s poorest cities. As Cory Booker navigates between his status as “rock star mayor” on Oprah’s stage and object of considerable distrust at home, the tumultuous changes planned by reformers and their highly paid consultants spark a fiery grass-roots opposition stoked by local politicians and union leaders.  The growth of charters forces the hand of Newark’s school superintendent Cami Anderson, who closes, consolidates, or redesigns more than a third of the city’s schools—a scenario on the horizon for many urban districts across America.
Russakoff provides a close-up view of twenty-six-year-old Mark Zuckerberg and his wife as they decide to give the immense sum of money to Newark and then experience an education of their own amid the fallout of the reforms. Most moving are Russakoff’s portraits from inside classrooms, as homegrown teachers and principals battle heroically to reach students damaged by extreme poverty and violence.

The Prize is an absorbing portrait of a titanic struggle, indispensable for anyone who cares about the future of public education and the nation’s children.

Dale Russakoff spent twenty-eight years as a reporter for the Washington Post, covering politics, education, social policy, and other topics. The Prize, serialized in The New Yorker, is her first book. She lives in Montclair, New Jersey.

“A brilliantly reported behind-the-scenes account of one city’s attempt to right its failing public schools. . . .Russakoff maintains a cleareyed distance, her observations penetratingly honest and incisive to what she sees and what she hears. I suspect some may have regretted letting Russakoff in. We couldn’t have asked for a better guide. . . . THE PRIZE is paradoxically a sobering yet exhilarating tale. For alongside the stories of those calling the shots, Russakoff tells the stories of those most profoundly affected by their decisions: teachers, students and their parents. . . . I repeatedly found myself writing in the margins, ‘Wow,’ either because of the heroic efforts by teachers and staffers or because of the obstacles facing their students. . . . THE PRIZE may well be one of the most important books on education to come along in years.”
—Alex Kotlowitz, New York Times Book Review

“A stunning account of efforts by wealthy outsiders and ambitious politicians to fix Newark's failing public schools. Veteran journalist Dale Russakoff's narrative is rich with details and anecdotes that showcase the quality of her writing and bring Newark to life for people who have never lived or visited there….The story likely will unnerve educators, reformers, taxpayers, politicians, parents and students anywhere."
—Chicago Tribune

"if you read Russakoff’s account and find your beliefs vindicated, you’re not trying hard enough."
—The Seventy Four

“Washington Post reporter Russakoff’s fascinating study of the struggle to reform the Newark school system reveals the inner workings of a wide range of systemic and grassroots problems (charter schools, testing, accountability, private donors) plaguing education reform today… Russakoff’s eagle-eyed view of the current state of the public education system in Newark and the United States is one of the finest education surveys in recent memory.”
—Publishers Weekly, STARRED

"This is of one the most disturbing and powerful books I've read in years. The point of this story is not that the well intentioned Mark Zuckerberg and his wife gave $100 million to help those less fortunate. The point is they gave it to the wrong people. This deeply researched story left me cheering for teachers, crying for schoolchildren, and raging at politicians. With The Prize, Dale Russakoff demonstrates why she is one of the great nonfiction voices of our time."
—James McBride, author of The Color of Water and The Good Lord Bird

"Dale Russakoff managed to get amazing access to the inside story of Mark Zuckerberg’s giant gift to Newark’s schools. And she shows how it all fell apart, derailed and compromised by arrogant reformers, ambitious politicians, and short-sighted special interests. An essential history of the modern education-reform movement, both infuriating and inspiring."
—Paul Tough, author of  How Children Succeed: Grit, Curiosity, and the Hidden Power of Character

"Dale Russakoff, one of America’s great journalists, illuminates one of the country’s great problems—the failure of inner city schools—with on-the-ground reporting that extends from the governor’s office and fancy philanthropies down (or up) to the small miracles performed every day by dedicated Newark classroom teachers.  Defenders of charter schools and district schools will find not the usual talking points and platitudes, but hard truths contained in Russakoff’s brilliant blend of skeptical and compassionate reportage."
—Jonathan Alter, author of  The Center Holds: Obama and His Enemies


"With The Prize Dale Russakoff has brilliantly rendered the hopes, complexities, pitfalls, and flaws of the efforts to reform American education. This is not simply the compelling story of a single conflict-ridden school system, it is a metaphor for the failing institutions that have betrayed an entire generation of American children."
—Jelani Cobb, author of  To the Break of Dawn: A Freestyle on the Hip-Hop Aesthetic

"The Prize is a riveting cautionary tale. Despite the best intentions of philanthropists and politicians, big money and big data will not save urban education, as long as reform efforts are undemocratic and overlook the realities of poor children's lives. With her deep ties to Newark, only Dale Russakoff could have told this poignant story. The Prize is essential reading for anyone who cares about how to give hope to America's most vulnerable kids."
—Dana Goldstein, author of The Teacher Wars

"The fight for, or over, the children of Newark might have been “merely” an important story about the future of public education in America, but in Russakoff’s accomplished hands—and with a cast of characters including Chris Christie, Cory Booker, and Mark Zuckerberg—it has become a Shakespearean spectacle of cross-purposes: ambition, altruism, and just about any human drive that invites an equal and opposite reaction."
—Diane McWhorter, Pulitzer Prize-winning author of Carry Me Home