The Other Wind (The Earthsea Cycle #6) (Paperback) 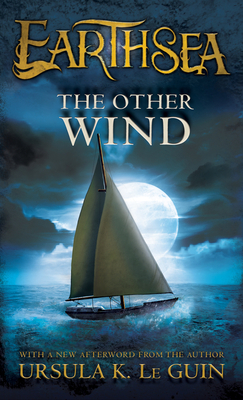 The Other Wind (The Earthsea Cycle #6) (Paperback)

This is book number 6 in the The Earthsea Cycle series.

The final book in Ursula K. Le Guin's must-read Earthsea Cycle. "The magic of Earthsea is primal; the lessons of Earthsea remain as potent, as wise, and as necessary as anyone could dream." (Neil Gaiman)

The sorcerer Alder fears sleep. The dead are pulling him to them at night. Through him they may free themselves and invade Earthsea.

Alder seeks advice from Ged, once Archmage. Ged tells him to go to Tenar, Tehanu, and the young king at Havnor. They are joined by amber-eyed Irian, a fierce dragon able to assume the shape of a woman. The threat can be confronted only in the Immanent Grove on Roke, the holiest place in the world, and there the king, hero, sage, wizard, and dragon make a last stand.

In this final book of the Earthsea Cycle, Le Guin combines her magical fantasy with a profoundly human, earthly, humble touch.

With stories as perennial and universally beloved as The Chronicles of Narnia and The Lord of The Rings—but also unlike anything but themselves—Ursula K. Le Guin’s Earthsea novels are some of the most acclaimed and awarded works in literature. They have received accolades such as the National Book Award, a Newbery Honor, the Nebula Award, and many more honors, commemorating their enduring place in the hearts and minds of readers and the literary world alike.

Join the millions of fantasy readers who have explored these lands. As The Guardian put it: "Ursula Le Guin's world of Earthsea is a tangled skein of tiny islands cast on a vast sea. The islands' names pull at my heart like no others: Roke, Perilane, Osskil . . ."

URSULA K. LE GUIN was born in Berkeley, California, in 1929, and passed away in Portland, Oregon, in 2018. She published over sixty books of fiction, nonfiction, poetry, drama, children’s literature, and translation. She was the recipient of a National Book Award, six Hugo and five Nebula awards, and was inducted into the American Academy of Arts and Letters.

"New and longtime Earthsea fans will be drawn to these impressive new editions."—Horn Book

Praise for Tales from Earthsea
"A treasure . . . It is at the top of any list of fantasy to be cherished."
-Andre Norton, author of Witch World
"Stellar . . . A triumphant return to the magic-drenched world of Earthsea . . .
Le Guin is still at the height of her powers, a superb stylist with a knack for creating characters who are both wise and deeply humane. A major event in fantasy literature."-Publishers Weekly (starred)
"Richly told. . . . Le Guin hasn't lost her touch. She draws us into the magical land and its inhabitants' doings immediately."-Booklist
Praise for THE TELLING
"Le Guin presents a literary masterpiece that is heartwarming, life-affirming, and touching."-The Christian Science Monitor