The Song of the Quarkbeast: The Chronicles of Kazam, Book 2 (Hardcover) 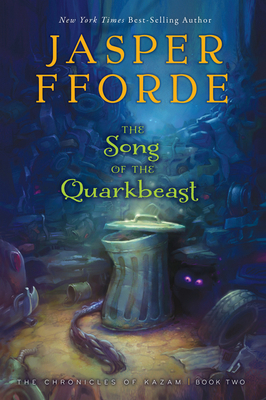 By Jasper Fforde
$16.99
Available to Order - Usually Arrives in Our Store in 4 to 7 Days

The
second book in Fforde's hilarious and quirky series for young readers
doesn't disappoint! Jennifer Strange, acting manager of Kazam Mystical
Arts Management, is back, this time older, slightly wiser, and possibly a
little bit in 'like' with one of her wizard colleagues. As magic in the
Ununited Kingdoms is on the rise, the useless King Snod is trying to
control its use, the Kazam sorcerers are asked to find a very powerful
and mysterious magical object, and the beloved Quarkbeasts appear to be
more important than anyone imagined. Jennifer is a wonderful female role
model – full of imagination, courage, intelligence, and loyalty, and
Fforde's witty social commentary and inspired characters make for a
great story for young readers." ~ Heather

— Heather is our Director of Marketing at Tattered Cover & No.1 Fforde fan

Magic has been in a sad state in the Ununited Kingdom for years, but now it’s finally on the rise, and boneheaded King Snodd IV knows it. If he succeeds at his plot, the very future of magic will be at risk! Sensible sixteen-year-old Jennifer Strange, acting manager of Kazam Mystical Arts Management and its unpredictable crew of sorcerers, has little chance against the king and his cronies—but there’s no way Kazam will let go of the noble powers of magic without a fight. A suspenseful, satirical story of Quarkbeasts, trolls, and wizidrical crackle!

Jasper Fforde is the internationally best-selling author of the Chronicles of Kazam, the Thursday Next mysteries, and the Nursery Crime books. He lives in Wales.
www.jasperfforde.com
Twitter: @jasperfforde
Instagram: @jasperfforde

"Fforde's signature humor and tongue-in-cheek social commentary persist in the second book of The Chronicles of Kazam trilogy."
—Kirkus

"It's not essential to have read the first book to enjoy this one, but those who enjoyed the witty wordplay and whacked-out humor of The Last Dragonslayer will find the same delights in this sequel." —Publishers Weekly, starred review

"Imaginatively energetic and made more so by a gloriously formidable female protagonist."
—The Horn Book Magazine

"The second volume in The Chronicles of Kazam is just as full of inspired silliness as the first . . . Fans will cheer this new installment, while readers who are new to the series can leap right into the fun."
—Booklist

"Jennifer is a fabulous character-smart, resilient, brave, willing to speak her mind and follow her heart, even when it absolutely does not seem like the right thing to do. . . The pace rarely slows. Nor does the silliness."
—School Library Journal