The Big Con: Crackpot Economics and the Fleecing of America (Paperback) 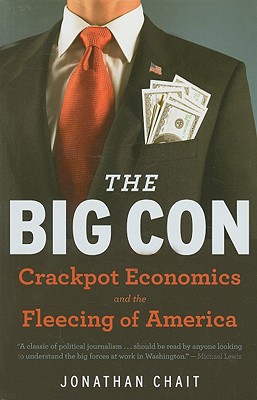 The Big Con: Crackpot Economics and the Fleecing of America (Paperback)


Available to Order - Usually Arrives in Our Store in 4 to 7 Days
American politics has been hijacked. Over the past three decades, a fringe group of economic hucksters has corrupted and perverted our nation’s policies. With dark, engaging wit, Jonathan Chait reveals how these canny zealots first took over the Republican Party and then gamed the political system and the media so that once unthinkable policies—without a shred of academic, expert, or even popular support—now drive the political agenda, regardless of which party is in power.
Why have these ideas succeeded in Washington? How did a clique of extremists gain control of American economic policy and sell short the country’s future? And why do their outlandish ideas still determine policy despite repeated electoral setbacks? Chait tells the outrageous and eye-opening story, expertly explaining just how politics and economics work in Washington. He has produced a riveting drama of greed and deceit that should be read by every concerned citizen, especially in an election year.

Jonathan Chait is a senior editor at the New Republic and writes the magazine’s signature TRB column. He is a contributing editor to the Los Angeles Times and has written for many publications including the New York Times, the Washington Post, the Atlantic, and the Wall Street Journal.

"Chait is both very serious and seriously funny as he traces the rise of conservatism over the past thirty years." --Michael Kinsley

"Jonathan Chait has nailed a large and important story about . . . the bamboozling of America . . . he writes with a mordant wit." --Sean Wilentz

"Jonathan Chait has written a classic of political journalism . . . Prepare to be shocked." --Michael Lewis, author of Liar's Poker, Moneyball, and The Blindside

"Who says economic policy has to be dry? [Chait] brings a lively wit and a limpid style to the topic." --Ramesh Ponnuru, senior editor, National Review, and author of The Party of Death

"Agree or not with the author's liberal beliefs, consider this a stimulating analysis of how public policy is formulated today." Kirkus Reviews

"His analysis should appeal to anyone interested in politics" Publishers Weekly

"[If] you're only going to read one book [about what's wrong with the modern Republican Party], this is the one." --Kevin Drum, Washington Monthly —