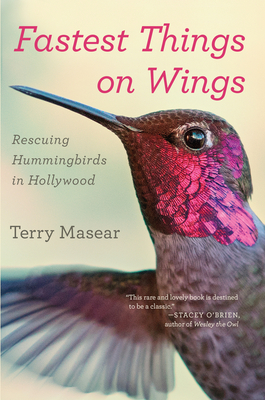 “I cannot believe what a gripping read this is.” —Robin Young, host of NPR’s Here and Now

“A book that will change forever the way you look at these little birds.”—Los Angeles Times


Before he collided with a limousine, Gabriel, an Anna’s hummingbird with head and throat cloaked in iridescent magenta feathers, could spiral hundreds of feet in the air, dive 60 miles per hour in a courtship display, hover, and fly backward. When he arrived in rehab caked in road grime, he was so badly injured that he could barely perch. But Terry Masear, one of the busiest hummingbird rehabilitators in the country, was determined to save this damaged bird. During the five months that Terry worked with Gabriel, she took in 160 orphaned and injured hummingbirds, from a miniature hatchling rescued by a bulldog to Pepper, a female Anna’s grounded on a film set. In their time together, Pepper and Gabriel formed a special bond and together, with Terry’s help, learned to fly again. Woven around Gabriel’s and Pepper’s stories are those of other colorful birds in this personal narrative filled with the science and magic surrounding these fascinating creatures.

“This is a charming and lively summertime read, something for the patio or balcony, glass of iced tea at hand, a hummingbird or two zipping around the azaleas.”—Dallas Morning News

“I was riveted, charmed, delighted, devastated, profoundly moved, and taken to a magical place few people ever get to glimpse.”—Stacey O’Brien, author of Wesley the Owl

TERRY MASEAR has been rescuing hummingbirds since 2005. Over the past ten years, she and a network of rehabbers in Southern California have rescued 5,000 hummingbirds, the majority of which have been released back into the wild. Terry received her Ph.D. from UCLA, where she teaches English as a Second Language. She has taken time off from teaching to focus on researching and writing about hummingbirds.

TERRY MASEAR has taken time off from teaching English as a second language at UCLA Extension to devote time to researching and writing about hummingbirds. Terry and her network in Southern California rescue and rehabilitate over five hundred orphaned and injured hummingbirds each year.

“Terry Masear’s charming account of saving hurt and orphaned hummingbirds grabbed my attention from the first paragraph and kept me riveted until the very last page. I loved this artfully woven story and am certain that animal lovers of all ages will as well.” — Michele Raffin, author of The Birds of Pandemonium

“This rare and lovely book is destined to be a classic. I was riveted, charmed, delighted, devastated, profoundly moved, and taken to a magical place few people ever get to glimpse. It’s one of the best books I’ve ever read about how rehabbers bond with the animals we save.” — Stacey O’Brien, author of Wesley the Owl

“This book is a delightful read. No one else could write such a wonderful memoir of care, compassion, and delight for these small creatures. Masear’s writing is enthralling and captivating—and I hated for it to end.” — Joanna Burger, author of The Parrot Who Owns Me

“Fastest Thing on Wings is an exaltation of hummingbirds, but it’s also the story of Terry Masear’s exceptional heart and heroism in saving these fragile and remarkable creatures. In her beautiful account, every rescue is a revelation. Hollywood is full of stars, but few shine as brightly as hers.” — Wayne Pacelle, president and CEO, Humane Society of the United States