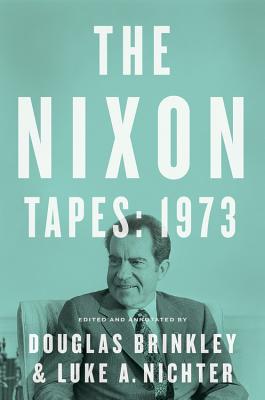 The blueprint for Nixon’s downfall, based on tapes released from 2010 to 2013, most of which have never been published

When The Nixon Tapes: 1971–1972 was published in August of 2014, it jumped immediately onto the New York Times bestseller list and captivated media attention for its many revelations.  Douglas Brinkley and Luke Nichter’s heroic efforts to transcribe and annotate the highlights of more than 3,700 hours of recorded conversations provided an unprecedented and fascinating window into the inner workings of a momentous presidency.  Now, with a concluding volume to cover the final year of the Nixon taping system, Brinkley and Nichter tell the rest of the story — once again with revelations on every page, including:

With Nixon’s dominating 1972 reelection receding into the background and the Watergate scandal looming, The Nixon Tapes: 1973 reveals the inside story of the tragedy that followed the triumph.

“A revealing selection . . . For those of us who would never tolerate the crackle and confusion of earphone eavesdropping, these transcripts provide another dose of the ugly (also sometimes comic) shenanigans by which the Nixon team violated the Constitution and caused a president preoccupied with power – his own and the nation’s – to suffer an ineluctable slide into impotence.”
—The New York Times Book Review