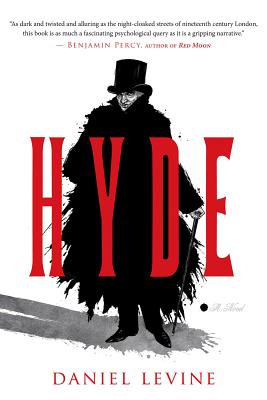 By Daniel Levine
Please email or write store for pricing and availability information.
Out of Print

What happens when a villain becomes a hero?

Mr. Hyde is trapped, locked in Dr. Jekyll’s surgical cabinet, counting the hours until his inevitable capture. As four days pass, he has the chance, finally, to tell his story—the story of his brief, marvelous life.

Summoned to life by strange potions, Hyde knows not when or how long he will have control of “the body.” When dormant, he watches Dr. Jekyll from a remove, conscious of this other, high-class life but without influence. As the experiment continues, their mutual existence is threatened, not only by the uncertainties of untested science, but also by a mysterious stalker. Hyde is being taunted—possibly framed. Girls have gone missing; someone has been killed. Who stands, watching, from the shadows? In the blur of this shared consciousness, can Hyde ever be confident these crimes were not committed by his hand?

“You may think you know Dr. Jekyll, but this Hyde is a different beast altogether."—Jon Clinch, author of Finn

"Prepare to be seduced by literary devilry! Go back to Victorian times to find a very postmodern whodunit. Visceral prose, atmosphere you could choke on, characters who seem to be at your very shoulder."—Ronald Frame, author of Havisham

"Hyde brings into the light the various horrors still hidden in the dark heart of Stevenson’s classic tale of monstrosity and addiction. Devious and ingenious, it is a blazing triumph of the gothic imagination."—Patrick McGrath, author of Asylum

"This spellbinding first novel is an ingenious revision of a classic Gothic tale...Narrated by Hyde, the book deliversa new look at this enigmatic character and intriguing possible explanations for Jekyll’s behavior...[Hyde] offers many surprises and rich, often intoxicating prose." --The Washington Post, "The five best thrillers of 2014"

“Levine's account is a masterpiece of hallucination; his narrator is feverish, righteous, intense. The author knows what to invent and what to leave to the master. And about that confession: Hyde doesn't open it, and neither does Levine. He leaves it to Stevenson, to whom he is faithful with his prose. The shockers may be born of this century, but this chilling new version is a remarkably good fit with the original horror classic.” -- The Miami Herald

“Daniel Levine’s intelligent and brutal first novel, Hyde, puts a fresh spin on the well-worn material…It goes beyond a companion piece to an independent novel worth reading in its own right.” - The Columbus Dispatch

"Levine’s evocation of Victorian England is marvelously authentic, and his skill at grounding his narrative in arresting descriptive images is masterful (of the haggard, emotionally troubled Jekyll, he writes, 'He looked as if he’d survived an Arctic winter locked within a ship frozen fast in the wastes')." - Publishers Weekly, boxed and starred

"We realize, in the process, how little Stevenson really explored Edward Hyde, how Hyde was a function of the narrative, an idea but not a fleshed-out man. Giving him flesh and humanity, Levine makes him a kind of tragic hero and gives the original version an added dramatic and emotional dimension. A fascinating companion piece to a classic story." - Booklist

"Levine’s masterful in his surrealistic observations of Hyde subsuming Jekyll...Cleverly imagined and sophisticated in execution..." – Kirkus

"Daniel Levine’s ambitious and imaginative literary debut...Taking the parameters of Stevenson’s story, but deepening and extending the details, Levine allows us to view Hyde not merely as the venal incarnation of Jekyll’s soul, but as a fully fledged character in his own right...Levine answers many questions that Stevenson left unexplored....a visually dark and viscerally brooding tale that avails itself of a cinematic style of storytelling that, of course, Stevenson could never have imagined....an entertaining and intriguing work, as much a meditation on and extrapolation of Stevenson’s original intentions as a freestanding work of popular fiction. With compelling intensity, Levine makes a noteworthy literary debut." - BookPage

“This rich, allusive, erudite novel is a welcome reminder of what a tour de force really is.” – David Leavitt, author of The Indian Clerk and many others

“Daniel Levine locates the strange beneath the familiar in this intricately imagined, meticulously executed debut. You may think you know Dr. Jekyll, but this Hyde is a different beast altogether.” -- Jon Clinch, author of Finn and The Thief of Auschwitz

“Daniel Levine has staked his claim to one of the most compelling stories of all time, The Strange Case of Dr. Jekyll and Mr. Hyde, and brilliantly made it his own in this knockout debut novel. The mind of Hyde is as dark and twisted and alluring as the night-cloaked streets of 19th century London, and this book is as much a fascinating psychological query as it is a gripping narrative.”—Benjamin Percy, author of Red Moon, The Wilding, and Refresh, Refresh

"Prepare to be seduced by literary devilry! Go back to Victorian times to find a very postmodern whodunit. Visceral prose, atmosphere you could choke on, characters who seem to be at your very shoulder. My sole regret after spending several hours inside Daniel Levine's highly literate thriller is that I didn't think of Hyde for myself." —Ronald Frame, author of Havisham

"A gloriously disturbing portrait of man’s animal nature ascendant, Hyde brings into the light the various horrors still hidden in the dark heart of Stevenson’s classic tale of monstrosity and addiction. It’s Daniel Levine’s extraordinary achievement to give voice to a creature capable of indulging every impulse of transgression, while driving its higher self to damnation. Devious and ingenious, Hyde is a blazing triumph of the gothic imagination."—Patrick McGrath, author of Asylum, Martha Peake, Spider, and others