Harry Versus the First 100 Days of School (Library Binding) 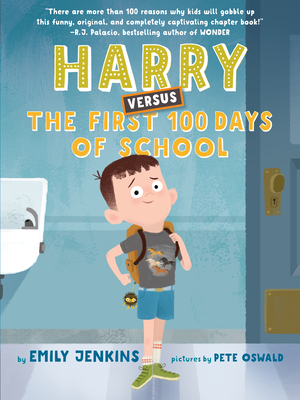 Harry Versus the First 100 Days of School (Library Binding)

An acclaimed author and a #1 New York Times bestselling illustrator team up to bring us a funny, warm, and utterly winning chapter book that follows, day by day, the first hundred days in one first grader's classroom.

In just one hundred days, Harry will learn how to overcome first-day jitters, what a "family circle" is, why guinea pigs aren't scary after all, what a silent "e" is about, how to count to 100 in tons of different ways, and much more. He'll make great friends, celebrate lots of holidays, and learn how to use his words. In other words, he will become an expert first grader.

Made up of one hundred short chapters and accompanied by tons of energetic illustrations from bestselling illustrator of The Good Egg and The Bad Seed, this is a chapter book all first graders will relate to--one that captures all the joys and sorrows of the first hundred days of school.

PETE OSWALD is the #1 New York Times bestselling illustrator of The Good Egg, as well as The Bad Seed, which was an Amazon Best Children's Book of the Year and an indie favorite. He has worked as a character designer, a concept artist, and an art director on many popular films, including Madagascar 2, Cloudy with a Chance of Meatballs, and Angry Birds. This is his first chapter book.
Praise for the Harry Versus the First 100 Days of School:

“Infused with the author’s characteristic, multileveled tongue-in-cheek humor and even some satiric tweaks.” —Booklist, starred review

“This appealing chapter book is a terrific addition to any 100-day narrative collection. It is perfectly tailored for a read-aloud and is bound to be a favorite.” —School Library Journal

Praise for the Toys trilogy:

“A sure hit for reading aloud and a classic in the making.” —The San Francisco Chronicle

"Jenkins deftly penetrates the natural anxieties of childhood—the phobias, the insecurities, the self-doubts—without playing them down." —The New York Times Book Review