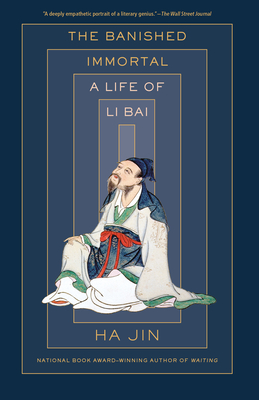 
Available to Order - Usually Arrives in Our Store in 4 to 7 Days
In his own time (701–762), Li Bai’s brilliant poems—shaped by Daoist thought, filled with an irrepressible lust for life—were never given their proper due. Nonetheless, his lines rang out on the lips of tavern singers, soldiers, and writers throughout the Tang dynasty, and his deep desire for a higher, more perfect world gave rise to his nickname: the Banished Immortal. With the instincts of a master novelist, Ha Jin draws on a wide range of historical and literary sources to weave the great poet’s life story, following Bai from his origins on the western frontier to his rambling travels as a young man. Jin also takes us through the poet’s later years—in which he became swept up in a military rebellion that altered the course of China’s history—and the mysterious circumstances of his death.

Today, Bai’s verses remain an inextricable part of the Chinese language—taught to schoolchildren, recited at parties and toasts—and are famed throughout the world. The Banished Immortal is an extraordinary portrait of a poet who both transcended his time and was shaped by it, and whose ability to live, love, drink, dance, and mourn without reservation produced some of the world’s most enduring verses.
Ha Jin left his native China in 1985 to attend Brandeis University. He is the author of eight novels, four story collections, four volumes of poetry, and a book of essays. He has received the National Book Award, two PEN/Faulkner Awards, the PEN/Hemingway Foundation Award, the Asian American Literary Award, and the Flannery O'Connor Award for Short Fiction. In 2014 he was elected to the American Academy of Arts and Letters. He lives in the Boston area and is a professor at the creative writing program at Boston University.
"A deeply empathetic portrait of a literary genius whose vicissitudes in life . . . would pale a Shakespearean drama.” —The Wall Street Journal

“An affectionate and thoughtful portrait of a complicated man and a master poet. . . . American readers’ Western bias has left the Chinese poet Li Bai less well-known here than in his native land, where he is considered a foundational writer. [The Banished Immortal] is a worthy corrective and an engaging introduction to the poet’s life and work.” —BookPage

“Ha Jin’s masterful style and deep affection for his subject make the book a pleasure to read. . . A number of readers will pick up this book knowing its author but not Li Bai, and Ha Jin makes sure they see Bai’s prodigious talent.” —Shelf Awareness (starred review)

“A taut introduction to the life and poetry of the influential eighth-century Daoist poet . . . Ha Jin’s polished biography will give a wider audience access to the politics and beauty of a major Chinese poet.” —Publisher’s Weekly (starred review)

“Award-winning novelist and poet Jin offers a glimpse into the life of one of China’s most celebrated poets . . . Scholarly and emotionally engaging . . . Essential.” —Library Journal (starred review)

“[Bai’s] life as distinguished poet and fiction writer Ha Jin so limpidly relays it was peripatetic. . . . Yet he was an unstaunchable fount of poems of friendship, drinking, dancing, nostalgia, and regret. . . . Bai still stands, with his friend Du Fu, at the pinnacle of Chinese poetry, and his influence is extensive the world over.” —Booklist