I am Anne Frank (Ordinary People Change the World) (Hardcover) 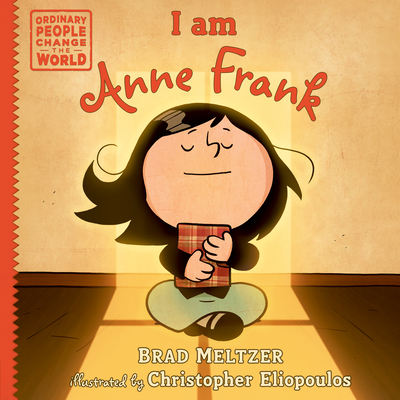 I am Anne Frank (Ordinary People Change the World) (Hardcover)


On Our Shelves Now
The 22nd book in the New York Times bestselling series of biographies about heroes tells the story of Anne Frank, the young Jewish girl who documented her life while hiding from the Nazis during World War II. (Cover may vary)

This engaging biography series focuses on the traits that made our heroes great--the traits that kids can aspire to in order to live heroically themselves. Each book tells the story of an icon in a lively, conversational way that works well for the youngest nonfiction readers. At the back are an excellent timeline and photos. This volume features Anne Frank, whose courage and hope during a time of terror are still an inspiration for people around the world today. While Anne and her family hid in an attic during the Holocaust, she kept a journal about all her hopes and fears and observations. That journal and the story of her life are still read and told today to remember the life of a young girl and warn against the consequences of bigotry.

Included in each book are:
• A timeline of key events in the hero’s history
• Photos that bring the story more fully to life
• Comic-book-style illustrations that are irresistibly adorable
• Childhood moments that influenced the hero
• Facts that make great conversation-starters
• A virtue this person embodies: Anne Frank's unwavering hope is central to this biography

You’ll want to collect each book in this dynamic, informative series!
Brad Meltzer is the New York Times bestselling author of Heroes for My Son, Heroes for My Daughter, and a number of suspense novels like The Lightning Rod. He is also the host of the History Channel television shows Brad Meltzer's Decoded and Brad Meltzer's Lost History (in which he helped find the missing 9/11 flag). He lives in Florida with his wife and their three children.

Christopher Eliopoulos began his illustration career at Marvel Comics, and has worked on thousands of comics, including his own Cow Boy and Franklin Richards: Son of a Genius. He is the author and illustrator of the picture books The Yawns Are Coming! and The Giggles Are Coming! and the graphic novels Cosmic Commandos and Monster Mayhem. He lives in New Jersey with his wife and their college-graduate twin sons (who also make an appearance in each Ordinary People Change the World book).

★ "Meltzer extolls Jewish values while gently addressing the escalating persecution of Jews and the horrors of the Holocaust, acknowledging the terror but framing Frank’s story as one of resilience and hope . . . This undeniably somber volume is appropriately lightened by Eliopoulos’ disarming cartoons, which utilize large panels, speech bubbles, and simple yet expressive character designs." —Booklist, starred review