The Female Persuasion: A Novel (CD-Audio) 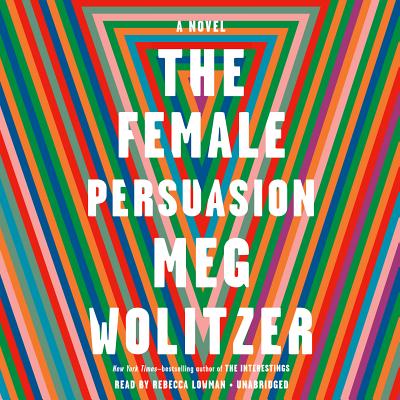 By Meg Wolitzer, Rebecca Lowman (Read by)
Please email or write store for pricing and availability information.
Special Request - May Not Be Available

“I never could have anticipated this book, and now I can't imagine a world without it, especially at this moment in American history. The Female Persuasion follows the ambitious but shy Greer Kadetsky, her boyfriend, her best friend, and the feminist icon who launches her into the world. Through these vivid, complex, and lovable characters, Wolitzer explores both the principle and reality of feminism, as well as the desire to become our fullest selves and the twists and turns that journey can take. My heart raced while reading this book, and I never wanted it to end. The Female Persuasion is powerful, generous, smart, and deeply kind; I can't wait for the world to meet it.”
— Megan Bell, Underground Books, Carrollton, GA

“I never could have anticipated this book, and now I can’t imagine a world without it, especially at this moment in American history. The Female Persuasion follows the ambitious but shy Greer Kadetsky, her boyfriend, her best friend, and the feminist icon who launches her into the world. Through these vivid, complex, and lovable characters, Wolitzer explores both the principle and reality of feminism, as well as the desire to become our fullest selves and the twists and turns that journey can take. My heart raced while reading this book, and I never wanted it to end. It is powerful, generous, smart, and deeply kind.”
— Megan Bell, Underground Books, Carrollton, GA

“A powerful coming-of-age story that looks at ambition, friendship, identity, desire, and power from the much-needed female lens." —Bustle

To be admired by someone we admire—we all yearn for this: the private, electrifying pleasure of being singled out by someone of esteem. But sometimes it can also mean entry to a new kind of life, a bigger world.

Greer Kadetsky is a shy college freshman when she meets the woman she hopes will change her life. Faith Frank, dazzlingly persuasive and elegant at sixty-three, has been a central pillar of the women’s movement for decades, a figure who inspires others to influence the world. Upon hearing Faith speak for the first time, Greer—madly in love with her boyfriend, Cory, but still full of longing for an ambition that she can’t quite place—feels her inner world light up. And then, astonishingly, Faith invites Greer to make something out of that sense of purpose, leading Greer down the most exciting path of her life as it winds toward and away from her meant-to-be love story with Cory and the future she’d always imagined.

Charming and wise, knowing and witty, Meg Wolitzer delivers a novel about power and influence, ego and loyalty, womanhood and ambition. At its heart, The Female Persuasion is about the flame we all believe is flickering inside of us, waiting to be seen and fanned by the right person at the right time. It’s a story about the people who guide and the people who follow (and how those roles evolve over time), and the desire within all of us to be pulled into the light.

MEG WOLITZER is the New York Times bestselling author of The Interestings, The Uncoupling, The Ten-Year Nap, The Position, The Wife, and Sleepwalking. She is also the author of the young adult novel, Belzhar. Wolitzer lives in New York City.

"The novel could not be any more timely, even though its length and the completeness of its world suggest to me that it must have been conceived before the recent upheavals and protests. … The Female Persuasion has gone straight into my library of favorite novels ever, on a shelf next to David Copperfield, Dinner at the Homesick Restaurant, Lonesome Dove, and Love in the Time of Cholera." —Nick Hornby

"[The Female Persuasion’s] subtle, powerfully ambivalent forays into second-wave feminism, the nature and limits of co-operative action and the intersection between the political and the personal function as depth charges whose ripples continue to rock our unstable little boats. It is a significant contribution to Wolitzer’s body of work." —The Guardian

"The Female Persuasion is wonderfully dense and wise, a page-turner that succeeds both at character and ideas. It felt true to life.” —Chimamanda Ngozi Adichie

"Surprises await both generations of women in this smart page-turner." —USA Today

"A dynamic, sprawling novel...Wolitzer has always been expert at capturing an emotion in a single image, and in this book she luxuriates in her skill." —The Atlantic

"Meg Wolitzer is the novelist we need right now...[The Female Persuasion is] the sort of book that comes along in too few authors' careers—one that makes the writer's intellectual project snap into sharp focus, and with it, the case that their artistry is not merely enjoyable but truly important." —The Washington Post

"[Wolitzer] writes in warm, specific prose that neither calls attention to itself nor ignores the mandate of the best books: to tell us things we know in ways we never thought to know them." —The New York Times Book Review

"Uncannily timely, a prescient marriage of subject and moment that addresses a great question of the day: how feminism passes down, or not, from one generation to the next." —The New York Times

"Wolitzer is an irresistibly charming novelist, a keen, affectionate examiner of society." –The New Yorker

"[Wolitzer is] old-fashioned in the best sense, a spiritual descendant of writers like Elizabeth Gaskell and Charlotte Brontë. Her novels blend philosophical matters with acute social commentary, grappling with ideas as robust as the characters she brings to life." —Wall Street Journal Magazine

"Wolitzer’s social commentary can be as funny as it is queasily on target." –USA Today

"Wolitzer's narrative poses difficult questions about feminism using an approach that is direct, generous, and, most importantly, not presuming there is one correct answer. A work of imagination and intelligence that deserves a wide readership." —Los Angeles Review of Books

"Wolitzer's talent as a writer shines in lines that say more in a sentence than most writers do in paragraphs…One can only hope that her readers — of the male and female persuasion — will keep the conversation going after the last page.” —Associated Press

"Wolitzer’s ultra-readable latest illuminates the oceanic complexity of growing up female and ambitious—and reveals the author’s substantial insight into the tangles of gender and power." —Vogue

"[Wolitzer is] a keen humanist with a singular gift for social observation." —Entertainment Weekly

"Wolitzer’s engrossing new novel, The Female Persuasion, is something of a rebel yell, slapping gender right in the title and confronting the question, What does a feminist look like?…So when you’re done binge-reading your copy, hand it off to a fellow literature lover. He’ll thank you for it." —Elle

"A grand work, with immense insight into the loss of idealism, the formation of identity, and the nuances of being a woman today." —InStyle

"I loved the book for the way it portrays every uncharted step of Greer’s ‘find a mentor’ process… It felt fresh and invigorating to see a familiar woman-to-woman work relationship develop in a novel." —The Cut

"It is the messy, painful emotions of this book, rendered by Wolitzer with exacting specificity, that make it so stunning." —Vox

"Wolitzer has always found a way to write engrossing, smart, and breezy books that also cut to the heart of the conundrum of living as a woman in the world." —Vulture

"Absorbing, a page-turner that neatly layers gaps of information to add up to a full, multi-generational drama.” —Quartz

"A new feminist classic for the modern era...It's a powerful coming-of-age story that looks at ambition, friendship, identity, desire, and power from the much-needed female lens." —Bustle

"The book we needed about the female experience and female friendships in 2018. It’s funny, compelling, complex, and so incredibly timely.” —Hello Giggles

"An intricately woven and deeply layered story that follows women who connect, yearn, chase their ambitions, navigate structures of existing power while claiming their own, and who write their own stories—stories that ignite their imaginations and, sometimes, look vastly different from what they first planned.” —Southern Living

"Finally, a novel about a complicated relationship that doesn’t get nearly enough attention: that between mentor and mentee. Full of Meg Wolitzer's signature acumen and insight." —Esquire

"Much has changed in the feminist movement, and for all women... and this book observes those changes with a gimlet eye." —Time

"Delves into mentorship—and how even the people we admire most can be flawed." —Real Simple

"Meg Wolitzer’s latest is a bildungsroman for the new feminist age, full of ambition, ego, and the power of female mentorship.” —Town & Country

The Female Persuasion is the best kind of social novel—a brilliant book about relationships set against a backdrop of principles, movements and change.” —Newsday

"A big, fat, delicious book about feminism and the power of female mentorship.” –Los Angeles Times

“Wolitzer is at her best when dropping wry but casual observations. The pages are peppered with little bonbons of accuracy.” —Chicago Tribune

“Wit and description are a few of Wolitzer's many strengths. … The work masterfully captures the highs, lows and unexpected twists of the idealistic life.” —Minneapolis Star Tribune

“Wolitzer is one of those rare novelists who is able to capture the zeitgeist… A master weaver of story lines.” —The Millions

“Wolitzer’s writing is always so comfortable. It never feels strained or effortful; it’s like a friend telling you a story…The Female Persuasion never disappoints.” —Ploughshares

“Ambitious and satisfying…This insightful and resonant novel explores what it is to both embrace womanhood and suffer because of it.” —Publishers Weekly, starred review

“Sweeping yet intimate...In a complex web of friends, lovers, mentors, and rivals, Wolitzer compassionately and artfully discerns the subtle strengths at the core of these essential connections.” —Booklist, starred review

"Feels very much of the moment...essential." —Library Journal, starred review