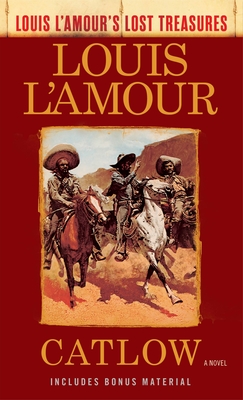 Ben Cowan and Bijah Catlow had been friends since they were boys. By the time they grew to manhood, Catlow had become an outlaw and Cowan a U.S. marshal. So when his old friend rode to Mexico to pull the biggest robbery of his career, it became Ben Cowan’s job to hunt him down.

While trailing Catlow south of the border, Ben meets Rosita Calderon. Intelligent and beautiful, her presence further complicates what is already a dangerous situation. While trying to protect his friend from Mexican soldiers and place him under arrest, Ben realizes that the price of getting Catlow back across the border might be more than he is willing to pay.

Louis L’Amour’s Lost Treasures is a project created to release some of the author’s more unconventional manuscripts from the family archives.

In Louis L’Amour’s Lost Treasures: Volumes 1, Beau L’Amour takes the reader on a guided tour through many of the finished and unfinished short stories, novels, and treatments that his father was never able to publish during his lifetime. L’Amour’s never-before-seen first novel, No Traveller Returns, faithfully completed for this program, is a voyage into danger and violence on the high seas. These exciting publications will be followed by Louis L’Amour’s Lost Treasures: Volume 2.

Additionally, many beloved classics will be rereleased with an exclusive Lost Treasures postscript featuring previously unpublished material, including outlines, plot notes, and alternate drafts. These postscripts tell the story behind the stories that millions of readers have come to know and cherish.
Our foremost storyteller of the American West, Louis L’Amour has thrilled a nation by chronicling the adventures of the brave men and woman who settled the frontier. There are more than three hundred million copies of his books in print around the world.