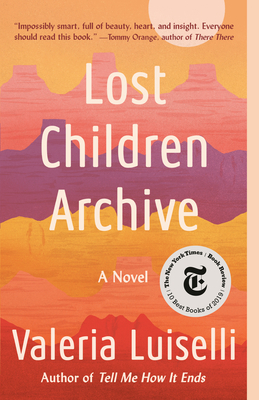 “Really incredible fiction takes you on a journey, and somewhere along the way you realize how much of it reflects your own reality. In Lost Children Archive, Valeria Luiselli’s narrator is highly observant of her inner life and the world around her. She unravels a story that’s about family and how walls between people and nations are built — and what they damage. In reading this book, I felt like I was in the car on the family’s road trip — feeling all the conflicting emotions that Luiselli’s narrator is feeling as a partner, mother, and resident in today’s United States.”
— Zoey Cole, Books Are Magic, Brooklyn, NY

NEW YORK TIMES 10 BEST BOOKS OF THE YEAR • “An epic road trip [that also] captures the unruly intimacies of marriage and parenthood ... This is a novel that daylights our common humanity, and challenges us to reconcile our differences.” —The Washington Post

In Valeria Luiselli’s fiercely imaginative follow-up to the American Book Award-winning Tell Me How It Ends, an artist couple set out with their two children on a road trip from New York to Arizona in the heat of summer. As the family travels west, the bonds between them begin to fray: a fracture is growing between the parents, one the children can almost feel beneath their feet.

Through ephemera such as songs, maps and a Polaroid camera, the children try to make sense of both their family’s crisis and the larger one engulfing the news: the stories of thousands of kids trying to cross the southwestern border into the United States but getting detained—or lost in the desert along the way.

A breath-taking feat of literary virtuosity, Lost Children Archive is timely, compassionate, subtly hilarious, and formally inventive—a powerful, urgent story about what it is to be human in an inhuman world.

Valeria Luiselli was born in Mexico City and grew up in South Korea, South Africa, and India. An acclaimed writer of both fiction and nonfiction, she is the author of the essay collection Sidewalks; the novels Faces in the Crowd and The Story of My Teeth; and, most recently, Tell Me How It Ends: An Essay in Forty Questions. She is the recipient of a MacArthur “Genius Grant”; the winner of two Los Angeles Times Book Prizes, an American Book Award, and the 2021 Dublin Literary Award; and has been nominated for the National Book Critics Circle Award twice and the Kirkus Prize on three occasions. She has been a National Book Foundation “5 Under 35” honoree and the recipient of a Bearing Witness Fellowship from the Art for Justice Fund. Her work has appeared in The New York Times, Granta, and McSweeney’s, among other publications, and has been translated into more than twenty languages. She lives in New York City.

ONE OF BARACK OBAMA'S FAVORITE BOOKS OF THE YEAR

“Impossibly smart, full of beauty, heart and insight. Everyone should read this book.”
—Tommy Orange, author of There There

“A Great American Novel for our time.”
—Vanity Fair

“Unforgettable, down to its explosive final sentence. . . . [Luiselli] audaciously stretches the bounds of storytelling.”
—Entertainment Weekly

“Virtuosic. . . . The brilliance of the writing stirs rage and pity. It humanizes us.”
—The New York Times Book Review

“This is a novel that challenges us, as a nation, to reconcile our differences. . . . [The] writing shimmers like its desert setting.”
—The Washington Post

“A remarkable feat of empathy.”
—NPR

“[A] brilliantly intricate and constantly surprising book.”
—The New Yorker

“[Luiselli’s] language is so transporting, it stops you time and again.”
—O, The Oprah Magazine

“Like all great novels. . . . Lost Children Archive is unquestionably timely, [but] it also approaches a certain timelessness.”
—Los Angeles Times