Breaking Rockefeller: The Incredible Story of the Ambitious Rivals Who Toppled an Oil Empire (Hardcover) 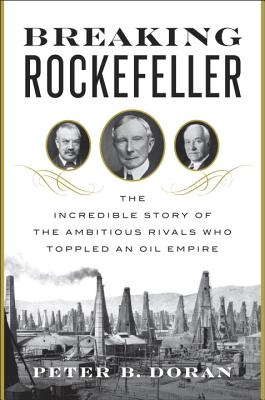 By Peter B. Doran
$28.00
Warehouse Out of Stock - Available to Backorder

Marcus Samuel, Jr., is an unorthodox Jewish merchant trader. Henri Deterding is a take-no-prisoners oilman. In 1889, John D. Rockefeller is at the peak of his power. Having annihilated all competition and possessing near-total domination of the market, even the U.S. government is wary of challenging the great “anaconda” of Standard Oil. The Standard never loses—that is until Samuel and Deterding team up to form Royal Dutch Shell.

A riveting account of ambition, oil, and greed, Breaking Rockefeller traces Samuel’s rise from outsider to the heights of the British aristocracy, Deterding’s conquest of America, and the collapse of Rockefeller’s monopoly. The beginning of the twentieth century is a time when vast fortunes were made and lost. Taking readers through the rough and tumble of East London’s streets, the twilight turmoil of czarist Russia, to the halls of the British Parliament, and right down Broadway in New York City, Peter Doran offers a richly detailed, fresh perspective on how Samuel and Deterding beat the world’s richest man at his own game.

Peter B. Doran is vice president for research at the Center for European Policy Analysis (CEPA) in Washington, D.C., where he leads the center’s energy horizons and defense programs. He is the author of the popular “History of Oil” podcast on iTunes. A recognized expert on international affairs and national security, his articles have appeared in Foreign Policy, Defense News, National Review, The American Spectator, and the Journal of Energy Security. His analysis and commentary are regularly featured in U.S. and European media, such as Fox News, The Wall Street Journal, and Newsweek. He holds a master's degree from Georgetown University's Edmund A. Walsh School of Foreign Service in the Center for Eurasian, Russian, and East European Studies.

“Breaking Rockefeller emulates the best oil literature, in which geology and geopolitics go hand in hand.”
—The Wall Street Journal

“[Marcus Samuel and Henri Deterding’s] story, though not new, is grippingly retold in Breaking Rockefeller. . . . The guts, greed and gusto of this cast of characters are what give the book its vigor. . . . The book is timely in an era when America’s shale revolution has upset the OPEC cartel’s efforts to control the world’s oil markets, and Eastern Europe struggles to free its gas markets from dependence on Russia’s Gazprom. It is a vivid reminder of the dangers of monopolies, and of the merits of no-holds barred competition and technological upheaval.”
—The Economist

“It is the author’s love affair (it can be called nothing less) with oil itself that most effectively entices the reader to make her way through these pages. . . . When Doran talks about [oil], it is with a sensuality of language comparable to that of the most decadent of gourmets. . . . Peter Doran’s writing style is lively, accessible and sometimes slightly breathless. Each one of his chapters ends with a dramatic, almost apocalyptic-sounding statement that leads neatly to the next one. It works. Even the most ardent of fossil fuel haters will find Breaking Rockefeller hard to resist.”
—The Post and Courier

“Why haven’t you heard [Marcus Samuel’s] full story before? Because his history is more elusive than a shell game: He had all of his papers and correspondence burned. Now Doran has gathered enough secondary evidence to tell his tale.”
—The New York Post (a must-read book of the week)

“In Breaking Rockefeller, author and energy expert Peter B. Doran tells the story of an unlikely partnership that dared to take on—and take down—Rockefeller. . . . [A] well-researched history.”
—The Fort Worth Star-Telegram

“An expansive and engaging overview of the first tumultuous decades of the oil industry. His vigorous prose and persuasive narrative manage to capture all of the major players and events of that industry’s first 50 years . . . I used to tell readers who want to understand the history of the oil industry to read famed oil historian Daniel Yergin’s Pulitzer Prize-winning The Prize. I still do. But now I say that they should read Doran’s Breaking Rockefeller too. It really is a ripping nonfiction yarn that illuminates the oil industry’s formative years.”
—Bizmology

“[A] lively history of the early petroleum industry. . . . Doran's vigorous narrative conveys the drama of the oil industry in its heroic days, featuring grueling stretches of dry wells followed by marathon gushers; lurid, greedy oil boomtowns; and the wars, revolutions, and production gluts that made the business a roller-coaster. He's also good at untangling the underlying dynamics of finance, marketing, technology, and transportation. The result is an entertaining portrait of the oil industry's past and the business forces that still shape its present.”
—Publishers Weekly

“[Doran’s] main accomplishment is his illumination of the saga of how Marcus Samuel Jr. and Henri Deterding became rivals in the world oil trade and then, around the turn of the century, found enough common interest to attack the Standard Oil juggernaut from Japan, Russia, and elsewhere outside the U.S. . . . A readable popular history told largely through the actions of swashbuckling tycoons.”
—Kirkus Reviews

“Doran is a gifted writer and storyteller; his first-rate history and introduction to the petroleum business . . . delivers a page-turner sure to appeal to economists, historians, political scientists, and general readers interested in global economics.”
—Library Journal

“Peter Doran’s Breaking Rockefeller is the best kind of history, telling great stories, providing fascinating detail, and reflecting real knowledge. In this story of the origins of the modern oil industry, there are plenty of lessons for the present too.”
—Anne Applebaum, Pulitzer Prize-winning author of Gulag: A History and Iron Curtain: The Crushing of Eastern Europe 1944–1956

“Peter Doran’s enthralling account of the early days of the oil industry—particularly the mano-a-mano battle between a Jewish merchant in England and the original industry titan, John D. Rockefeller—reads like a thriller without sacrificing good solid scholarship.  With some relevant observations for our own time, this is a gem of a book.”
—Robert Kagan, New York Times bestselling author of Of Paradise and Power and The World America Made

“Peter Doran tells a riveting and exciting account of the formation of Royal Dutch Shell and how it managed to stand up to Standard Oil at the turn of the 19th century. With color and delight, he has captured the nature of the oil business at the time in this well-researched volume.”
—Anders Åslund, Senior Fellow, Atlantic Council

“Breaking Rockefeller is fast-paced yet anchored by a treasure of fascinating detail. It is an insightful historical backgrounder for today's global energy politics.”
—Robert D. Kaplan, Senior Fellow, Center for a New American Security and author of In Europe's Shadow