Fingerprints of the Gods: The Evidence of Earth's Lost Civilization (Paperback) 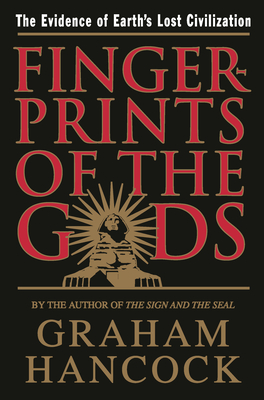 Fingerprints of the Gods: The Evidence of Earth's Lost Civilization (Paperback)


On Our Shelves Now
Could the story of mankind be far older than we have previously believed? Using tools as varied as archaeo-astronomy, geology, and computer analysis of ancient myths, Graham Hancock presents a compelling case to suggest that it is.

“A fancy piece of historical sleuthing . . . intriguing and entertaining and sturdy enough to give a long pause for thought.”—Kirkus Reviews

In Fingerprints of the Gods, Hancock embarks on a worldwide quest to put together all the pieces of the vast and fascinating jigsaw of mankind’s hidden past. In ancient monuments as far apart as Egypt’s Great Sphinx, the strange Andean ruins of Tihuanaco, and Mexico’s awe-inspiring Temples of the Sun and Moon, he reveals not only the clear fingerprints of an as-yet-unidentified civilization of remote antiquity, but also startling evidence of its vast sophistication, technological advancement, and evolved scientific knowledge.

A record-breaking number one bestseller in Britain, Fingerprints of the Gods contains the makings of an intellectual revolution, a dramatic and irreversible change in the way that we understand our past—and so our future.

And Fingerprints of God tells us something more. As we recover the truth about prehistory, and discover the real meaning of ancient myths and monuments, it becomes apparent that a warning has been handed down to us, a warning of terrible cataclysm that afflicts the Earth in great cycles at irregular intervals of time—a cataclysm that may be about to recur.

“Readers will hugely enjoy their quest in these pages of inspired storytelling.”—The Times (UK)
Graham Hancock was formerly East Africa correspondent for The Economist and a correspondent for the London Sunday Times. His The Sign and the Seal, an international bestseller, documented his real-life quest for the Ark of the Covenant. He has appeared on television with Michael Palin in his Pole to Pole series, and on the BBC and CNN, as well as the National Geographic’s Explorer series.

"I always wanted to do a biblical flood movie, but I never felt I had the hook. I first read about the Earth's Crust Displacement Theory in Graham Hancock's Fingerprints of the Gods."
—Roland Emmerich, Director "2012" in an interview from Time Out London