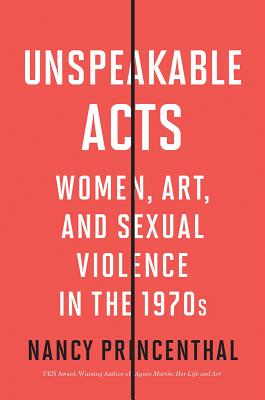 By Nancy Princenthal
$34.95
On Our Shelves Now

A groundbreaking exploration of how women artists of the 1970s combined art and protest to make sexual violence visible, creating a new kind of art in the process.

The 1970s was a time of deep division and newfound freedoms. Galvanized by The Second Sex and The Feminine Mystique, the civil rights movement and the March on Washington, a new generation put their bodies on the line to protest injustice. Still, even in the heart of certain resistance movements, sexual violence against women had reached epidemic levels. Initially, it went largely unacknowledged. But some bold women artists and activists, including Yoko Ono, Ana Mendieta, Marina Abramovic´, Adrian Piper, Suzanne Lacy, Nancy Spero, and Jenny Holzer, fired up by women’s experiences and the climate of revolution, started a conversation about sexual violence that continues today. Some worked unannounced and unheralded, using the street as their theater. Others managed to draw support from the highest levels of municipal power. Along the way, they changed the course of art, pioneering a form that came to be called simply, performance.

Award-winning author Nancy Princenthal takes on these enduring issues and weaves together a new history of performance, challenging us to reexamine the relationship between art and activism, and how we can apply the lessons of that turbulent era to today.

Nancy Princenthal is a New York–based writer. A former senior editor of Art in America, where she remains a contributing editor, she has also written for the New York Times, Parkett, the Village Voice, and many other publications. She is currently on the faculty of the MFA art writing program at the School of Visual Arts. Her previous book, Agnes Martin, won 2016 PEN/ Jacqueline Bograd Weld award for biography.

Unspeakable Acts is an important and urgent book. Princenthal’s trenchant, honest, complex exploration of the radical representations of sexual violence in the 1970s delineates the upheaval of implicit assumptions about rape, bodies, silence and speech in particular works by individual artists in light of their broader artistic and political meanings and lasting consequences. I read it with breathless, captive attention.

— Siri Hustvedt, author of "The Blazing World and Memories of the Future"

Nancy Princenthal speaks of the unspeakable brilliantly, bravely, thoroughly, and thoughtfully. She addresses art, literature, theatre, film and video games... and the real life politics they reflect, offering a long overdue look at creative coverage of rape, domestic violence, and other acts. In the process she has also written one of the best recent books on feminist arts.
— Lucy R. Lippard, writer and activist

Riveting… A potent study of feminist art and activism of the 1970s… Clearly grasping the scope and complexity of her subject, the author contextualizes the stumbles and stamina of feminism, addressing objectification and exploitation while focusing on artists' pivotal acts of defiance, which brought heightened awareness to taboo or underdiscussed topics… Paying attention to the groundbreaking work of artists giving voice to sexual violence, Princenthal plainly establishes art's significant contributions to social change movements.
— Kirkus Review

Throughout the art-historical record, sexual violence against women was a subject typically rendered by male artists for a male audience. Princenthal shows how that finally changed in the last quarter of the 20th century…women took an experience that had been artistically mined by men for millenniums..and found ways to convey it in their own terms… [She] takes a tangled history and weaves it into an elegant account.
— The New York Times

Nancy Princenthal's Unspeakable Acts delves into the links between violence and silence, art and terror, and how pioneering women made them into art. … [Her] lucid and challenging narrative chronicles the efforts of artists and activists (who were frequently one and the same) to find 'language for violence [as] the first step in mitigating its effects.' … Princenthal is also deft at drawing a roadmap through the political, social, and aesthetic divisions of the '70s.

A galvanizing work that seems bound to inspire artists for many years to come.
— ARTNEWS

This cogent, nuanced book — long in the works — focuses on the ways the rape of women has been depicted in the visual arts… In the 1960s and ’70s, female artists laid claim to the subject, manifesting its trauma in their own bodies, in uncompromising performances that were market-resistant in their day and feel right on time for a misogynist present.
— The New York Times

From page one of this book, Princenthal, an established writer, presents vigorous research. She provides her readers with every detail and description necessary to understand this movement and the work of the artists she chooses to emphasize… An important read… a great reference for anyone studying feminist artists and artwork of the 1970s.
— ARLIS/NA Reviews

Unbiased, comprehensive, and meticulous... an in-depth lesson in alternative history and theory of Western art structured around the works of the most prominent women artists of the 20th Century.
— The Brooklyn Rail

An important, engaging exploration of a decade of revolutionary artmaking…Nancy Princenthal’s meticulous research, clear writing, and thematic structure translates the variances of work by iconic artists and underknown practitioners alike, through a framework that illuminates without sensationalizing and theorizes without losing emotional weight.
— Woman's Art Journal