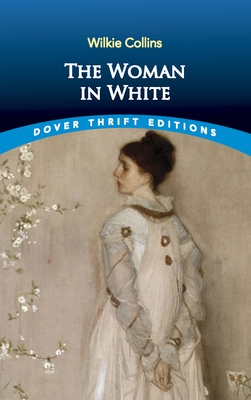 Who is the mysterious solitary woman dressed in white who accosts Walter Hartright late one night near London's Hampstead Heath? Why does she bear such an uncanny resemblance to Walter's student, the angelic Laura Fairlie? And what is the closely guarded secret that she claims will confound a sinister nobleman's malevolent plan?
With its compelling blend of mistaken identities, wrongful imprisonment, madness, and romance, this riveting story was the prototype for a new genre of fiction, the "sensation novel." A forerunner of modern detective and suspense fiction, it transplanted the thrills of Gothic horror tales from the chambers and dungeons of medieval castles to the everyday reality of suburban drawing rooms and boudoirs. Author Wilkie Collins excelled at devising cliffhangers that kept Victorians eager for the next installment of The Woman in White which appeared serially in Charles Dickens' weekly literary publication, All the Year Round. This much-imitated, enduringly suspenseful tale has continued to enthrall readers ever since.

A prolific author of the Victorian era, Wilkie Collins (1824-89) wrote "sensation" novels. The forerunners of today's detective and suspense fiction, his best-known works include The Moonstone and The Woman in White. Charles Dickens was his lifelong friend and collaborator, and many of Collins' stories first appeared in Dickens' weekly publication, All the Year Round.