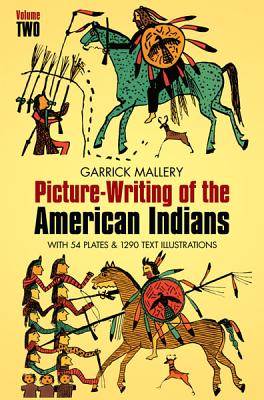 
Title unavailable, please email for information.
Of the early reports of the Bureau of Ethnology of the Smithsonian Institution, one of the most significant is Col. Garrick Mallery's report on the picture-writing of the American Indians. Except for a special section on petroglyphs (rock-writing), most of the examples are roughly contemporary with the writing of the report and were gathered by ethnologists, explorers, and expeditions to reservations. As such, the emphasis is on the meaning of the pictures, and the differences between the styles of picture-writing of the various tribes.
Included are nearly 1,300 pictures and 54 plates illustrating the material which Col. Mallery narrates. Examples include: knotted cords, notched or marked sticks and wampum; mnemonic pictures for remembering songs, traditions, treaties, and accounts; the calendars (winter counts) of Lone-Dog and Battiste Good; maps, notices of visits, condition and warning; tribal designations, clan designations, tattoo marks (especially from the Haida); designations of authority, property, and personal names; religious symbols of the supernatural and of mythic animals; symbols used on charms and amulets, in religious ceremonies and in the burial of the dead; pictographs of cult associations, of daily events, and of games; historic records such as the Indian account of the Battle of Little Big Horn; records of migrations, hunts, and notable events; biographic records; significance of colors; picture-writing as it became conventionalized; and much more. There are also sections on interpretation of pictographs and on the detection of frauds, and comparative material from other cultures.
For anthropologists, sociologists, historians, or artists, Col. Mallery's account is still the basic study of North American Indian picture-writing, Its wealth of pictorial material is not to be found anywhere else. And since most of the material was collected by contemporaries while picturing was still an important method of communication, the ethnologists were often assisted by the Indians themselves in decoding the pictographs and discovering the wealth of information that was conveyed by them.