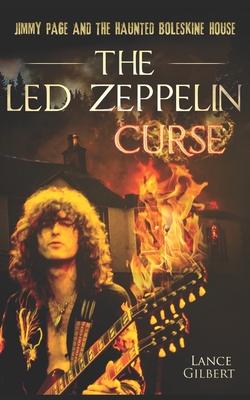 
Available to Order - Usually Arrives in Our Store in 4 to 7 Days
"This book is so well-researched and so well-written that I read it non-stop from cover-to-cover because it was so engrossing. Add to it the unsettling possibilities of unknown forces at work, and you have one hell of a story."

"This is a well written, exhilarating read. I read a LOT of rock bios. I've read at least four on Zep alone. And it was, without a doubt, the most enjoyable of them all."

"Fascinating, freaky and FUN " "This book often had me thinking, Really? No way " "Not your normal rock bio; it's awesome " "This book has completely made me reassess Led Zeppelin, Jimmy Page, the curse and Aleister Crowley."

"The author makes it very clear that he is coming at the story of Led Zeppelin' rise and fall from the perspective of the Occult and leader Jimmy Page's affinity for it. So, if you deeply doubt magick, spirits, curses, etc; then this is not the book for you. There are many ways to look at the fortunes and tragedies of Led Zeppelin and a "curse" and or magick is just one, as he points out."

"Did dark forces play a part in the bands success? I'm saying nothing " "Very spooky. Tied together many things I already knew intuitively and separately, into a focus that was enlightening. His logic is impeccable and delightfully he grabs and maintains interest."

"I've read though some of the one-star reviews. And it's clear these people either take Led Zeppelin way too seriously, or, they completely miss the premise of this book. The author is QUITE CLEAR throughout that this is a journey through the storied history of Zep when viewed through the lens of an occultist. The forward of the book lays a foundation where Lance is clear with the reader -- interpret as you may, but if you believe in magick, here is a possible explanation for the rise and fall of a mighty band."

"It was evident that the author's experience in the occult and the paranormal would provide me with the most truthful and logical analysis of the band I would ever get concerning this topic." "Probably the most in-depth book that will ever be written on the Led Zeppelin occult/curse subject. The fact that the author has dabbled in rituals heightens the intensity."

"Whether you're a fan of rock or the supernatural or both, this book is a must. You can always tell whether an author studies the paranormal or has first-hand experience, and this book is written by someone who understands the intricacies of the supernatural from experience This is what sets this book apart, only someone who has 'been there and done that' would be able to examine, analyze, and tell this story the way he has."

"I believe the author proved his assumption regarding the Zeppelin curse...his words spoke loudly, and he was intellectually sound in his opinion on many levels. It was extremely well written and obviously the author knew enough about Crowley to write an accurate account of his influence on Page."

"As a fan of Led Zeppelin, mother to a teenaged daughter who wants to be the next John Bonham and obsessive researcher of the occult and paranormal, I really enjoyed this book. It is written in a friendly tone that sounds like Lance Gilbert is chatting directly with you, which I liked."

The legend of the Led Zeppelin Curse emerged in the late 1970's after multiple accidents, deaths and other bad luck began to plague the band and those close to them.

Led Zeppelin founder Jimmy Page was known for his intense interest in the occult and in particular the notorious magician Aleister Crowley. In the early 70's Page collaborated with underground filmmaker and fellow Crowley enthusiast Kenneth Anger on his film Lucifer Rising. The partnership ultimately soured, and Anger sought revenge.