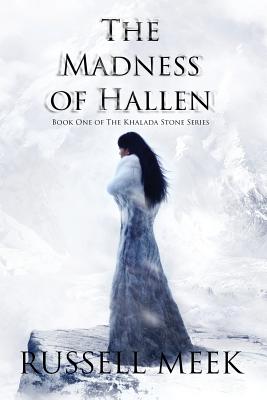 By Russell Meek
Email or call for price. Handling fee may apply.
Hard to Find

The Khalada Stone fantasy series is a weave of manipulation and double crossing, a mix between T.E. Lawrence's unification of the Arabian desert during WWI, a less romantic view of Saladin, the great Islamic warrior who fought against King Richard in the 12th century crusades, and intrigue akin to that of feudal Japan. It is set in a collapsing world, ranging from high, snowy mountain peaks to vast, arid deserts under constant threat from a crushing sea.

It is essentially a quest between three who lay claim over the desert. Na'ilah; blood heir to Husam al-Din, the legendary warrior who united the deserts, and Ohrl and Faerl; two brothers, descendants of Hallen who first discovered al-Din's power. Centuries ago, against the threat of war, six priests of Johsala forged their greatest weapon, a man named as Husam al-Din: the Sword of the Faith. His will to dominate and control all living souls united the Eastern Tribes against the Kjatmir, an enemy from a barren land devoid of water.

After the unification, al-Din was betrayed and murdered by his wife, Maymunah. She sought to claim Husam's power for herself and their unborn bloodline, and secure the Great Depression for her native Kjat. The priests saw through her ruse, and in a final attempt to save the desert they harnessed al-Din's strength into six harmonic stones. They fled Johsala, and disappeared far beyond Maymunah's reach.

Since that day, Maymunah's bloodline has feverishly sought the stones, feeling a pull toward them, but it is not until twenty generations later, when an explorer named Hallen accidentally triggers the Stone of Imad al-Din, that any hint of their existence is revealed. Now it falls to Na'ilah, blood heir to the mind of al-Din, to travel to the Meil'vohllen Mountains and begin reclaiming the stones.